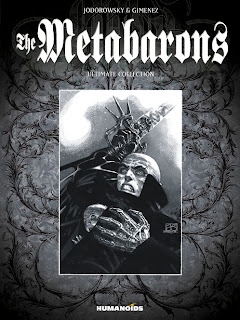 “What keeps me going back to THE METABARONS is the immense volume and speed of its innovation. There is literally a new and mad idea on every page.”

Warren Ellis wrote that, and I don’t know if I can put it any better. The Metabarons is completely mad. I know I say that a lot about Jodorowsky, but it’s The Metabarons, more than any other book, where he shows off his talent for crazy ideas and surprising twists to best effect. After a newborn baby is decapitated, his parents give him a cybernetic head. The fate of two galaxies will be decided by a single combat – father against son. Every chapter has a new surprise, a new twist, a new way to raise the stakes. The Metabarons: Ultimate Collection is a new, regular-sized hardcover collecting the first cycle in the saga (in other words, it includes everything except Weapons of the Metabaron).

The Metabarons is a science fiction multi-generational saga about a family of warriors that lives by a strict code of honour. The story covers five generations, from the beginning of the clan to the latest Metabaron, who you’ve met if you’ve read The Incal. The narrative is framed as a story being told by the latest Metabaron’s two servant robots, Tonto and Lothar. What makes this so engaging is that Lothar is not a good listener, and is often interrupting for clarification, or simply because he doesn’t believe the story. Occasionally he will fry a diode trying to figure out what will happen next. Tonto doesn’t have a lot of patience, and is always chiding Lothar for his stupid questions. For two supposedly emotionless robots they are extremely entertaining. These two little robots hold the book together and are two of the best characters Jodorowsky has created.

The other characters, the Metabarons and their lovers, are mythic, larger than life heroes. Characters like Aghora, whose body is female and whose brain is male, and who manages, impossibly, to impregnate herself, and who gives birth during battle. Honorata, a Shabda-Oud witch and lover of the first Metabaron, who instigates a crazy decades-long plan to continue the caste. And Steelhead, the warrior with the cybernetic head, who decides he needs to learn about love, and who searches out the last poet – who exists only as a head. So of course they join together, the head of the poet on the body of the warrior. But it isn’t long before this union produces tragic results.

All this is made even better by Giménez’s intense, realistic art. His characters are always in the throes of an intense emotion. From the agony of a son killing his father, to mindbending extradimensional space battles, his art is always as spectacular as it can be, and his effort shows in every panel.

Superhero fans take note: this edition has an introduction by Matt Fraction. This is appropriate, since The Metabarons might be the closest thing Europe has to a superhero comic. Grant Morrison talked about superhero stories “where the world is threatened every five minutes and godlike beings clash in the skies like fireworks”. He wasn’t talking about The Metabarons, but this quote sums up The Metabarons perfectly. It’s an intense roller-coaster ride through the moments of tragedy and victory (but mostly tragedy) of these driven, intensely passionate, sometimes insane, larger-than-life superheroes. 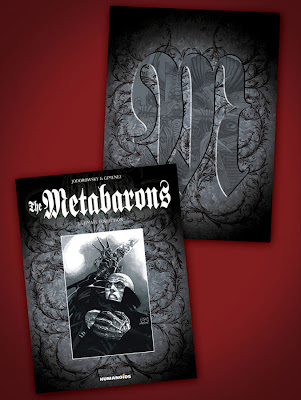 The Metabarons: The Ultimate Collection will be in-store on Wednesday, October 31st.