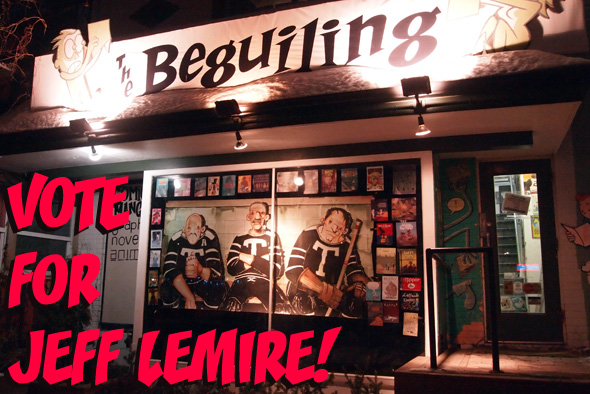 Hey folks! By now you’ve probably heard the bad news that Jeff Lemire’s Essex County did not take home the prize for the 2011 Canada Reads competition. It’s a bummer, but it’s still utterly fantastic that a graphic novel made it to the final 5 books, and we’re all totally proud of Jeff and everything he’s accomplished. But now, as far as we’re concerned, the real contest begins: The People’s Choice Award.

Head over to http://www.cbc.ca/books/canadareads/2011/canada-reads-2011-peoples-choice-poll.html and vote for Jeff Lemire’s Essex County as the book that should’ve taken home the top Canada Reads prize this year. Show those judges that Jeff’s book was the top choice, and bring further attention to both an amazing book and the medium itself! Voting ends Thursday morning at 7am, so vote right away!

And for more on Jeff and Essex, check out this interview that Peter and I gave to the fine folks at the CBC on his career and works, and why we think he was nominated. It’s at http://www.cbc.ca/books/canadareads/2011/01/the-beguiling-bookstore-gives-us-the-inside-scoop-on-essex-county.html.