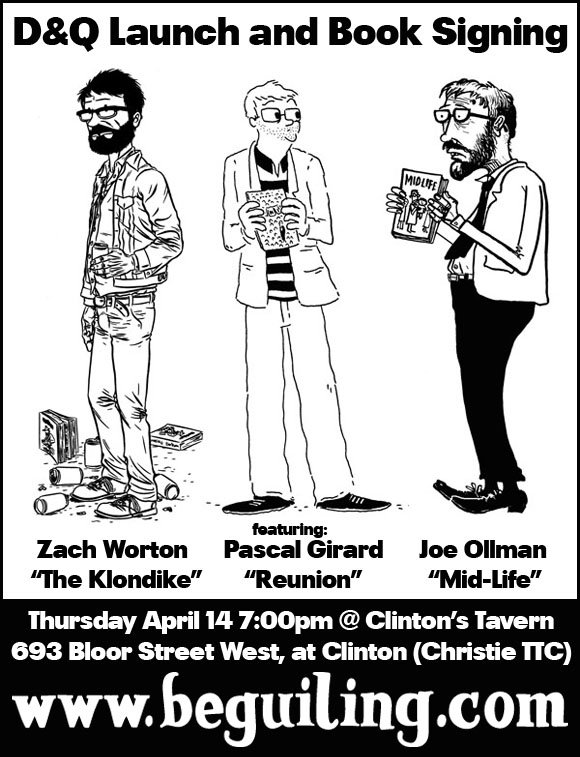 The Beguiling is proud to welcome a rare Triple Threat! D&Q Cartoonists Zach Worton, Pascal Girard, and Joe Ollman will launch their new graphic novels in Toronto on the evening of April 14th! UPDATE: This event will now be held in the front room of Clinton’s Tavern, same date, same time. Clinton’s is a large pub 3 blocks west of The Beguiling, and we’ve reserved the whole front room. All three cartoonists will be doing short presentations from their work, and a Q&A and signing session with the creators will follow.

So for now, treat this as a “save the date”. But let’s tell you about all three great books! 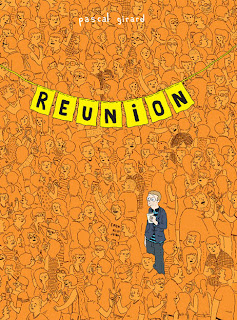 Pascal Girard’s REUNION: Reunion is a semi-autobiographical book that recounts the events of the summer of 2009, when Pascal Girard received an invitation to attend his ten-year high school reunion. Initially dismissing the idea of attending, he quickly changes his mind when he receives an email from Lucie Coté, the girl he had a huge crush on in high school. She tells Pascal that she will be at the reunion and wonders if he would like to accompany her. Pascal becomes flustered with joy, except two problems remain: he must keep his almost uncontrollable infatuation a secret from his girlfriend, Julie, and he must do something about his weight. At 252 pounds, he frets that his weight will put him in the “loser” category among his former classmates, but most of all, he must do something to impress Lucie. He decides on a drastic plan of action: he takes up jogging every day until he reaches his goal of shedding fifty pounds. Three months pass as Pascal dutifully jogs and fantasizes about meeting Lucie, until finally he reaches his weight goal on the eve of the reunion. The now-slender Pascal arrives at the big event, full of fervent anticipation. However, one by one, his fantasies of moving into the “winner” category become cruelly deflated with each conversation he has with his former classmates.

Girard has quickly emerged as one of the best under-thirty cartoonists in North America. Having only started drawing comics 5 years ago (he worked in construction until recently), Girard’s talent as both a writer and an artist has taken enormous strides with each new book he has created. Reunion is laugh-out-loud funny with wry self-deprecating humor, and Girard’s cartooning is effortless in its fluidity. 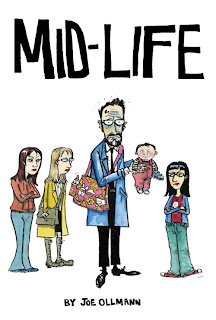 Joe Ollman’s MID-LIFE: Mid-Life is the story of a 40-year-old man, John, who becomes a father again with his much-younger second wife which results in a slow, painful attack by flowered baby bags and front facing baby carriers on his former virility and self identity. John always believed that age is a state of mind, however, his adult daughters, baby son, energetic wife, stressful job, house full of cats, and flabby body complete with bloated stomach and sagging bosom all lead John reluctantly to admit that he is having a midlife crisis. The crisis drives John to yell at his wife, pick fights with his daughters and miss deadlines at work that put his job on the line. John takes solace from the stress of everyday life with a seemingly harmless infatuation with the pretty children’s performer Sherry Smalls who sings adoringly to him directly from his son’s DVD. 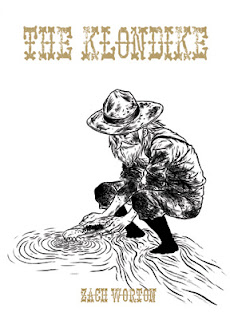 Zach Worton’s THE KLONDIKE: The Klondike gold rush shook the Yukon on the eve of the twentieth century and stands today as the defining era in the taming of North America and especially Canada’s Great North. The history of how a handful of colorful characters sparked the largest mobilization of gold seekers in history is brought vividly to life in this debut graphic novel by cartoonist Zach Worton. His stunning depictions of the Canadian wilderness are as much a part of the action as the key players: the prospector George Carmack; racist prospector Robert Henderson; “Skookum Jim Mason,” a Native American posthumously credited with discovering gold; “Soapy Smith,” a noted con artist; and Belinda Mulrooney, perhaps the first female involved in the gold rush to become rich; and the Royal Canadian Mounted Police. Worton draws the reader into an absorbing historical tale of political intrigue and personal adventure, played out amid the free-for-all atmosphere of the Wild West.

Drawn in an inviting, engagingly detailed style, The Klondike also features notes and introductory texts accompanying each chapter, and a thorough, illustrated index of all the key players in the gold rush, as well as a glossary featuring notes about “How to Pan for Gold” and tips on how to spot the differences between “fool’s gold” and the real thing.