The Beguiling is happy to be sponsoring the 2011 Toronto Zombie Walk, on October 22nd 2011. We invite those of you that like to dress-up and/or feast on the brains of the living to check it out, and support this great event. Here’s a brief write-up of what’s to come! 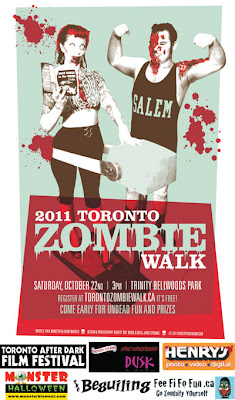 They’re back, they’re hungry and they’re not staying 6 feet under any longer! Last year nearly 6000 corpses writhed, weaved and lurched their way through the streets of Toronto feasting on those unlucky enough to be living.

NO WEAPONS PLEASE: Problems arising from weapons and prop weapons can put the walk and everyone’s enjoyment of the walk in Jeopardy, we therefore must stress that NO WEAPONS are permitted on the walk.

– From 12pm Onward, check out the Henry’s Camera Photo Booth to preserve all your undead memories!
– Visit DUSK’s deadly delicacies booth for treats and gory goodies for zombies of all types.
– Creeped Out’s annual Blood Booth: Need to retouch? Let these ghouls give you a severed hand with fresh blood.

ZOMBIE WEDDING at 2pm: The Undead are cordially invited to join Adam Invader and Thea Munster in Unholy Matrimony at 2pm in Trinity Bellwoods Park. Join the Newly Deads afterwards for prize give-aways before the walk commences at 3pm.

OFFICIAL TORONTO ZOMBIE WALK AFTER PARTY : After the walk, this year’s evening entertainment will be hosted by The Toronto After Dark Film Festival. At 7 pm, please join us at the Toronto Underground Cinema, 186 Spadina Avenue, (just north of Queen St. West) for a zombie double bill. Toronto After Dark is offering a special discount for the undead that night only! Featuring:

WAR OF THE DEAD (World Premiere of a new World War 2 set Zombie action film, most expensive film ever made in Lithuania’s history) at 9.45pm. Cast and crew from both films in attendance!

After the seeing the diabolical double bill, swing by the Tequila Bookwork, located at 512 Queen Street West, to feast and drink until the wee hours at the official TADFF after party!

Please note that evening events hosted by Toronto After Dark Film Festival are for undeads who are 19 years old and up.

Even more info at: http://torontozombiewalk.ca/