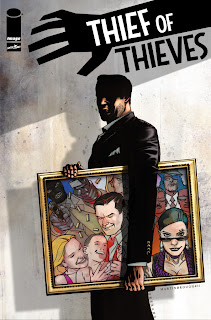 Out this week from Image Comics, Robert ‘The Walking Dead’ Kirkman and Nick ‘Morning Glories’ Spencer is Thief of Thieves #1, a brand new ongoing series! Image is getting behind this series in a big way, and we’ve decided to match them on that: If you buy Thief of Thieves #1 from The Beguiling, you can return it and get a full refund until the end of February.

We think that, especially considering how insanely popular The Walking Dead is (and this is by the same guy), this is going to blow up big. You’ll have wanted to get in on the ground floor. We’re taking away all of the risk of you trying it out and seeing if it’s for you.

Rules:
1. Offer valid February 8th to February 29th, 2012.
2. Must be accompanied by a receipt showing that you purchased it from The Beguiling, so please remember to ask for a receipt!
3. Book must be returned in salable condition.
4. One return per person.

Conrad Paulson lives a secret double life as master thief Redmond. There is nothing he can’t steal, nothing he can’t have… except for the life he left behind. Now, with a grown son he hardly knows, and an ex-wife he never stopped loving, Conrad must try to piece together what’s left of his life, before the FBI finally catch up to him… but it appears they are the least of his worries.