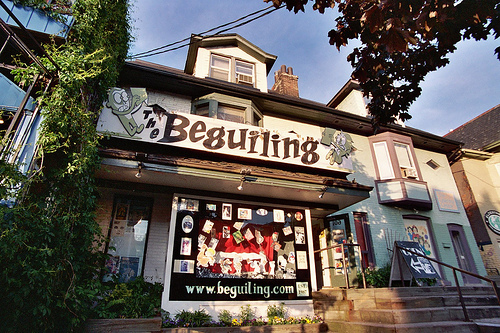 The Beguiling was founded in 1987, and 2012 will mark its 25th anniversary of providing comics, comix, and high-art funnybooks to Torontonians and comics fans around the world. Before we get into all of the great things we’re going to be doing to celebrate our big anniversary this year, I thought it might be nice to recap our busiest year ever, the just-ended 2011. 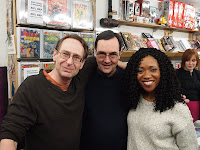 2011 started with a bang, as Kids in the Hall alumnus Scott Thompson stopped by to sign his brand new graphic novel The Hollow Planet! Scott was a gracious and wonderful guest, and SPACE was on hand with Natasha and Mark Askwith to film the proceedings! January also featured a month long “Boxing Day” sale (our only sale of the year)!

In February, the “Graphic Details: Confessional Comics by Jewish Women” show opened at The Gladstone Hotel. The Beguiling was an official sponsor of the event, both the art show and several of the great symposiums/workshops that were held. Later in February, I gave a talk for Toronto Public Library and Freedom To Read Week: Censoring Manga for Fun and Profit, about censorship and freedom of speech issues and how they relate to English-language manga. 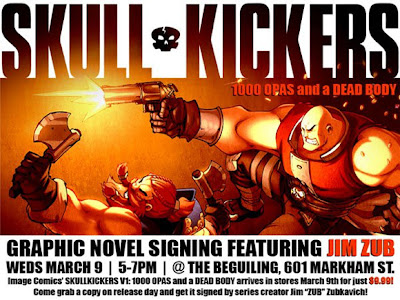 This was the month that things really started heating up at the store, as the cold weather started to fade and book launch events abounded! First up was Jim Zubkavich, stopping by for the launch of the first volume of his SKULLKICKERS graphic novel series. The next week the master of comics reportage Joe Sacco dropped into The University of Toronto to lecture on his work and career.

March 11th saw the tragedy of the great Tohoku Earthquake and Tsunami, a tragedy that Japan is still recovering from and will be for generations. March ended with Toronto Hearts Japan, an auction and art show organized by our friends at Magic Pony.

Three of our favourite contemporary cartoonists all had brand new releases from Drawn and Quarterly in early April, and so we held a great big joint book launch for the group! Historical fiction, fictionalized autobiography, and fiction-inspired-by-real-life marked Zach Worton’s The Klondike, Pascal Girard’s Reunion, and Joe Ollmann’s Mid-Life, and while the event got off to a bit of a slow start by the end it was a full-to-overflowing bar!

Then the very next day (we were really busy that week) was ARTISTS HELP JAPAN. The Beguiling, in association with UDON and Imaginism, got together with dozens of artists and illustrators from Toronto’s cartooning community to hold a day-long fundraiser in support of Japan, and those affected by the Tohoku Earthquake and Tsunami. Running for 12 hours, from noon to midnight, we raised a ton of money for Tsunami and Quake relief. It is easily the thing that I am proudest of this year, and I thank everyone who took part. 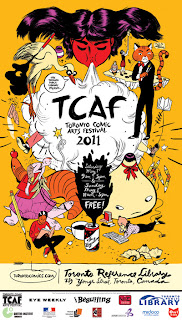 TCAF Month! Presented by Toronto Public Library and The Beguiling, The Toronto Comic Arts Festival returned for its 6th go-round, and its third at the lovely Toronto Reference Library. This year saw more than 15,000 attendees across Festival events, and nearly 2 full weeks of programming surrounding the fest. Full details on TCAF 2011 at http://torontocomics.com.

Things kicked off May 1st with Chester Brown launching an easy contender for ‘Book of the Year’, Paying for it., in a fabulous and jam-packed event hosted by the lovely Sasha Van Bon Bon. That week featured the The Next Day book launch with John Porcellino and Pop Sandbox, and the opening of the Comics, Manga and Co art show in conjunction with The Goethe Institut and featuring cartoonist Mawil.

Then Monday night, we had three events, with Lorenzo Mattotti and the Italian Cultural Institute, Usamaru Furuya introducing ZOO, a film he contributed to at Toronto Underground Cinema, and Arnaud Boutle at The Alliance Francais.

Then! The Beguiling sponsored (and Chris was a curatorial assistant) on JAPAN: TRADITION, INNOVATION, a massive museum exhibit at The Canandian Museum of Civilization in Ottawa (Hull). Chris and Peter had been consulting on the exhibit for 2 or 3 years, and the pop culture section of the exhibit featured a ton of input from Chris on manga, anime, video games and more. The Beguiling donated an entirely library of manga in English and French, and it was read by over 100,000 visitors over the 5+ months that the exhibit ran. It was a wonderful experience, and we were so happy to have been a part of it.

At the end of May we exhibited once again at Anime North, and we were lucky to have a special treat! Signing at our booth was Helen McCarthy, author of the book Osamu Tezuka: God Of Manga, a wonderful look at the life and career of Osamu Tezuka.

Nothing happened in June! Frankly, we were exhausted. We don’t even remember June. 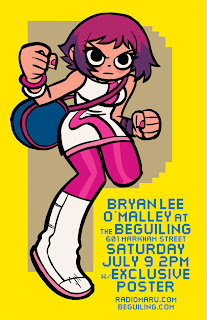 We made up for our June recovery in July, as we welcomed Bryan Lee O’Malley back to Toronto to celebrate the anniversary of the end of the Scott Pilgrim series. Bryan’s July 2010 event was our biggest single-creator event ever—over 2,000 people came out for our midnight launch of Scott Pilgrim 6, and we were very lucky to be able to mark the first anniversary with a sunny afternoon signing featuring nearly 500 fans. That was super fun!

From July 21-24 Peter, Krystle and myself took off to San Diego to sell some Original Art, meet up with cartoonists, and enjoy the pool. July 21-24th was also the 3rd Shinsedai Film Festival, a wonderful Festival of Japanese cinema that we were happy to support… we’re just sorry we missed it!

Oh, and Actor Michael Sheen gave us a nice shout-out on the TV when he was in town for the Toronto Harry Potter film premiere. We were only too happy to help him and his family when he was by the store. 🙂

One of the most interesting books of the year debuted in early August, Torontonian Ray Fawkes’ ONE SOUL. In the spirit of Alan Moore’s BIG NUMBERS, Ray put together a work that intertwines 16 lives spread across hundreds of years and created a truly unique, engrossing work. We were so happy to be able to run the launch of his book at The Merril Collection, at Toronto Public Library’s Lillian H Smith Library.

In August we also announced that we’d be opening a second location, and select Beguilers got an early preview of the new space as it played home to Anders Nilsen’s BIG QUESTIONS launch tour! I dug Anders’ talk a lot, and his massive 600+ page tome, nearly a decade in the making, is excellent.

The month ended with our midnight launch for DC Comics’ New 52 Promotion, where all 52 of their series started with new #1 issues. We had a shocking number of people come out at midnight to pick up Geoff Johns and Jim Lee’s JUSTICE LEAGUE #1 and decide to pick up the entire DC Universe! It was a huge success for us, and introduced hundreds of new readers to the store. 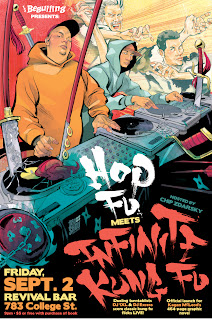 We then started a few solid weeks of in-store signings! Jeff Lemire came by on the 7th to sign his brand new ANIMAL MAN #1, and then the next week on September 14th to sign FRANKENSTEIN #1. After a week’s break, Francis Manapul set up and signed THE FLASH #1 for a ravenous crowd of Flash and DC 52 fans.

September was a crazy-busy month by the by, with Craig Thompson coming to Toronto in support of his new graphic novel HABIBI in a really entertaining presentation at Toronto Underground Cinema. Marc Bell launched his new book PURE PAJAMAS and was joined by Anders Nilsen and Mark Connery in a launch on the 24th. The month closed out with a good-old-fashioned alternative comic book launch, as Ethan Yip’s POPE HATS #2 had a standing-room-only welcome to the world at The Central, featuring guest appearances by Britt Wilson and Chester Brown! 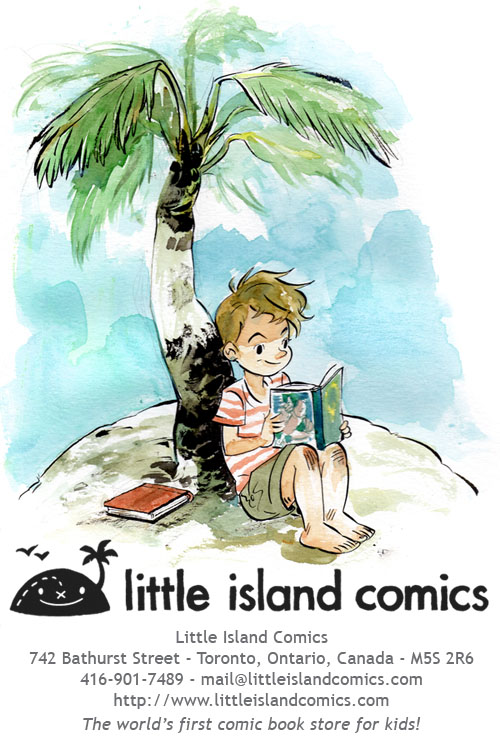 October featured our first partnership with a few different organizations: The Toronto SpecFic Colloquium welcomed Mike Carey to town and we had him in for a signing and sponsored his appearance, and we also sponsored the comics-friendly Toronto Zombie Walk for the first time, a much-beloved event in the city of Toronto. We also got behind Jeff Lemire’s ESSEX COUNTY in a big way as it was up for consideration in the Canada Reads event, which was supremely weird and exciting.

October saw the closing of the JAPAN/JAPON show at the Museum of Civilization, and according to the Museum it was hugely successful. 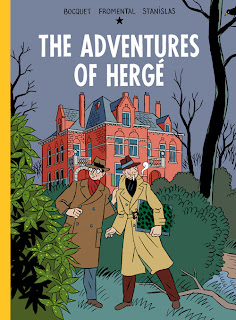 November opened and closed with our TORONTO DRAWS… event, featuring artistic tributes to the creations of Herge in support of The Comic Legends Legal Defence Fund, an anti-censorship organization. The closing featured a visit from French cartoonist Stanislas, illustrator of the graphic album THE ADVENTURES OF HERGE, which saw its English-language debut at the show.

November was full of events though, with a fantastic book discussion and lecture with Michel Choquette, author of THE SOMEDAY FUNNIES, a fabulous ‘lost’ collection of comics from creators around the world. The day after I got back from vacation, we held a book launch for the second fabulous volume of Jim Zub’s SKULLKICKERS too!

The month closed with the a second very-rare launch for a good-old-fashioned-independent-comic book, as Maurice Vellekoop returned to the world of comics with THE WORLD OF GLORIA BADCOCK from Koyama Press, in a fabulous event hosted by Sasha Van Bon Bon!

Over at Little Island, they had events with a bunch of non-fiction graphic novelists including the book launch for J.Torres’ POWER LUNCH at Little Island, Willow Dawson and John Lang launching their books HYENA IN PETTICOATS and LONE HAWK respectively, and Scott Chantler was on hand to launch the second book in his THREE THIEVES series!

Our first event cancellation of the year happened when Jordan Crane’s new book KEEP OUR SECRETS was delayed to 2012. We’ll have Jordan to Toronto though, mark my words!

The year stayed busy right up until the end though, as RUNAWAYS artist Adrian Alphona signed his new full-colour hardcover artbook SWEETNESS in store! The following week we welcomed Scott Hepurn to sign ORCHID, the series he is drawing (and the series that’s written by Rage Against The Machine guitarist Tom Morello!) Then our very last event of the year was our second (annual?) Dinosaur Comics Book Launch and Holiday Party. It drew a great crowd, was great fun, and we hope that Ryan North keeps releasing books so we can keep doing this every year!

So that’s over 50 events at over a dozen venues that we ran, sponsored, and/or had people at, not counting all of the trade shows and ‘private’ events we set up at as well. What a year!

We hope you got out to at least one of them; there was some amazing stuff and once-in-a-lifetime opportunities for comics, manga, and graphic novel fans in the city of Toronto. We were only too happy to help put it together though, and while 2011 may have been our busiest year ever, 2012 is certainly going to be no slouch… In fact, we’ve already got a whole bunch of plans underway! Thanks to all of the venues we worked with, thanks to all of the cartoonists we worked with, and thanks to everyone who came out and supported comics in Toronto!

– Christopher Butcher, on behalf of the staff of The Beguiling and of Little Island Comics