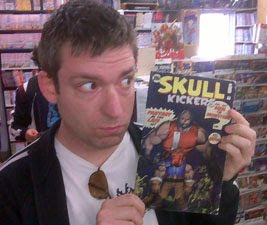 Thanks to everyone who came out to the SKULLKICKERS #1 book launch party last night! It was a really fun time, a few drinks were knocked back, and author Jim Zubkavich’s insights into the creation of the series were certainly… illuminating. 🙂 Seriously though, it was a super-fun time.

Zub dropped by the store today to sign our remaining stock of SKULLKICKERS #1, as well as all of the copies of the Street Fighter Legends: Ibuki series including the recently-released 4th and final issue.

We’re hearing of widespread sell-outs of Skullkickers #1, and ridiculously and offensively inflated prices on the first issue, by the by. That’s really too bad, because I’d like to think retailers had ample opportunity and warning to order enough copies. On that note, we’ve got plenty of copies of issue #1 in stock and they’re available for cover price. Limit 2 per person though, just in case some other store tries to scoop up a bunch. 🙂