Kurosawa, Ozu, Mizoguchi, Oshima, Kitano – around the world these names immediately bring to mind the best that Japanese cinema has to offer, but now that we’re at the beginning of a new century many film fans are wondering who the next generation of great filmmakers from Japan will be. Toronto’s 3rd annual Shinsedai Cinema Festival tries to answer that question by bringing some of the best work by new, young and independent Japanese filmmakers to Toronto, many for the very first time.

The Beguiling and The Toronto Comic Arts Festival are proud to be partnering with Shinsedai for a special presentation of MIDORI-KO, by director and animator Keita Kurosaka. Read on for details about the film, and visit the Shinsedai Film Festival website to buy tickets and more! http://shinsedai-toronto.com 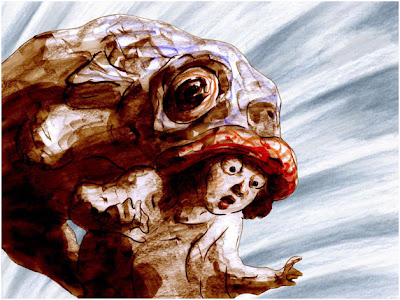 “Midori is a young woman with some very strong morals. Since she was a baby she was repulsed by the idea of eating meat, thus she’s spent her entire life as a strict vegetarian. It’s been a hard thing to pull off, especially given that the near future world Midori inhabits is plagued by food shortages and rationing. Most people will eat whatever lands on their plates, but Midori’s resolve is solid. Things change radically when Midori discovers a mysterious vegetable… or is it a creature? This gourd-like being is indeed a vegetable, but it also possesses a human face, arms, legs and intelligence! Midori, and Midori-ko, or “Baby Midori”, soon become fast friends, but soon their new relationship finds itself in peril. First, Midori-ko is being pursued by its creators, five genetic scientists who engineered this vegetable/ human hybrid as a solution to the world’s food crisis. Second, Midori soon discovers that her new little friend is absolutely delicious.

“World renowned animator Keita Kurosaka spent over a decade creating the world of Midori-ko, drawing nearly 20,000 framesof the film entirely by hand. The end result is a surreal story of the battle between humanity’s most base desires and its highest aspirations filtered through the visual styles of artists Hieronymous Bosch and Honoré Daumier.”