There’s so much cool stuff happening as we get closer to the 2011 Toronto Comic Arts Festival! While news is disseminated almost every day on the TCAF Twitter, @Torontocomics, or on the website at http://torontocomics.com, once a week we’ll post quick updates here with all the TCAF news worth knowing! 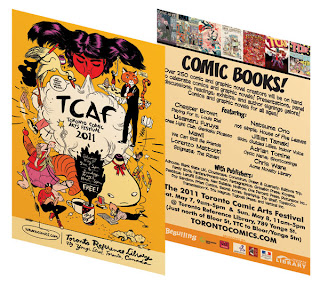 – We’re often asked “How can I help out TCAF?” and other than volunteering or just bringing a lot of money to the Festival to spend with our exhibitors, the number one way you can help is to spread the word! We’ve just gotten our first round of 2011 Promotional Postcards printed up, courtesy of the fine folks at K6 Postcards (Check them out oline at http://k6cards.tumblr.com/). If you’re so inclined, please drop by The Beguiling and grab a small handful of cards, and distribute them around the city. Thanks!

– TCAF announced new featured guest John Porcellino! Porcellino will be attending TCAF courtesy of Toronto publisher Pop Sandbox (KENK), and will be involved with an important new graphic novel from the pub entitled The Next Day. A multi-media project produced in association with The National Film Board, The Next Day will be one of the major TCAF-related exhibitions and installations around the city this May!

– TCAF announced new featured guest Darwyn Cooke! Cooke has three times previously been a Featured guest of the show, and has created two of our gorgeous Festival Posters (2005, 2007). Cooke has numerous major works under his belt including DC: The New Frontier and runs on Catwoman, Jonah Hex, and Will Eisner’s The Spirit. Currently he’s working at adapting 4 volumes of RICHARD’S STARK’S PARKER into graphic novel format with publisher IDW, with The Hunter and The Outfit released in 2009 and 2010.

– We want you to volunteer at TCAF! It’s a super-fun weekend and it couldn’t happen without the dozens of awesome volunteers we get every year who help us put it on! If you’re interested in helping out at TCAF 2011 or just want to know what it’s all about, please head over to http://torontocomics.com/volunteer/ for all the details! You can fill out the volunteer application form, and we’ll contact you closer to the time of the show with more info.