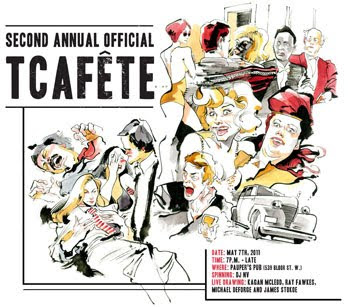 Who doesn’t?! That’s why you’re going to attend the 2nd Annual Official TCAFête! Kick it with us on the 2nd floor of Paupers Pub at 539 Bloor Street West (South side of Bloor just East of Bathurst) to celebrate the first successful day of TCAF 2011! Everyone is welcome because this year’s party is going to be even more off the hook than the last. “How is that even possible?” you ask. That’s because we’ve got DJ NV on the 1s and 2s and there’ll be in-your-face Live Drawing Demos by Michael Deforge, Ray Fawkes, James Stokoe and Kagan McLeod.


DJ NV is known for Soul Sonic Events and his weekly residences at various Queen West venues.
You may have seen Kagan McLeod’s work…everywhere, like the cover of Kill Shakespeare, in the National Post, and in your DREAMS because you’ve been reeling since last year’s demo!
Michael Deforge is The Doug Wright award winning creator of Lose. Lose # 3 will be debuting at TCAF 2011!
Ray Fawkes‘s new book Possessions is currently available with One Soul to be released by ONI Press this summer!
James Stokoe, a Vancouver native, is the creator of the wildly psychedelic Orc Stain!

If you are a Guest, Vendor, Volunteer or Staff at TCAF, there’s no cover. The email address to get your name on guest list is TBA so keep checking back to make sure you get on it. For everyone else, cover is $5. A mere $5 for one of the awesomest events of the season? What a steal! So come to see and be seen amongst your fave comics peeps, your friends from previous TCAF’s, new friends, and maybe even some Toronto b-list celebrities! Sorry young’uns it’s 19+