Come one, come all, to the launch of the new mini-series JOYRIDE, illustrated by Toronto’s own Marcus To! Previous of the hacktivist minis, and soon to be regular pencil artist on Nightwing for DC Rebirth, JOYRIDE is a far-future sci-fi series about a group of rebellious young people that bring try to bring down an oppressive government, and all involved getting more than they bargained for!

Marcus To will be signing at Page & Panel on April 21st, the day after the book’s release, and he’ll be joined by Toronto artist and Joyride series colourist Irma Kniivila, AND the first issue’s variant cover artist Nimit Malavia (that’s their cover up-top). It’s gonna be a great signing and a lot of fun, and we hope you’ll come by and check it out!

In the future, Earth sucks. The stars have been blocked out for so long that people have forgotten there was anything else besides the dumb World Government Alliance watching over them, training children to join the militarized Allied Youth and eliminating all resistance with a giant ray gun. Uma Akkolyte is a girl who shoots first and leaps before she looks, and when she gets a strange message from outside the barricades of SafeSky, she jacks a spaceship and punches through the stratosphere with an unlikely crew of teens who are totally not ready for what they’re about to find.

Page & Panel: The TCAF Shop and The Beguiling Books & Art are proud to welcome the art team of smash-hit comic series MS. MARVEL to Page & Panel on Wednesday, September 16th, from 4pm-6pm!

Copies of many issues of Ms. Marvel, as well as trade paperbacks, and the newly released hardcover edition will be available for sale at the event…!

This is a slightly early event, starting at 4pm and going to 6pm, so make plans if you gotta! And we’ll see you on the 16th!

Join artist and author Julie Maroh for a special evening featuring a discussion of her acclaimed graphic novel Blue is the Warmest Color, adapted into the award-winning feature film released this fall.

Julie Maroh is an author and illustrator originally from northern France. Visit her website at juliemaroh.com

Presented by Arsenal Pulp Press and The Beguiling, in partnership with the Consulate General of France in Toronto.

The Spectral Engine is the unearthly entity that brings together thirteen historically documented ghost stories to tell a timeless narrative of life, death, and redemption. 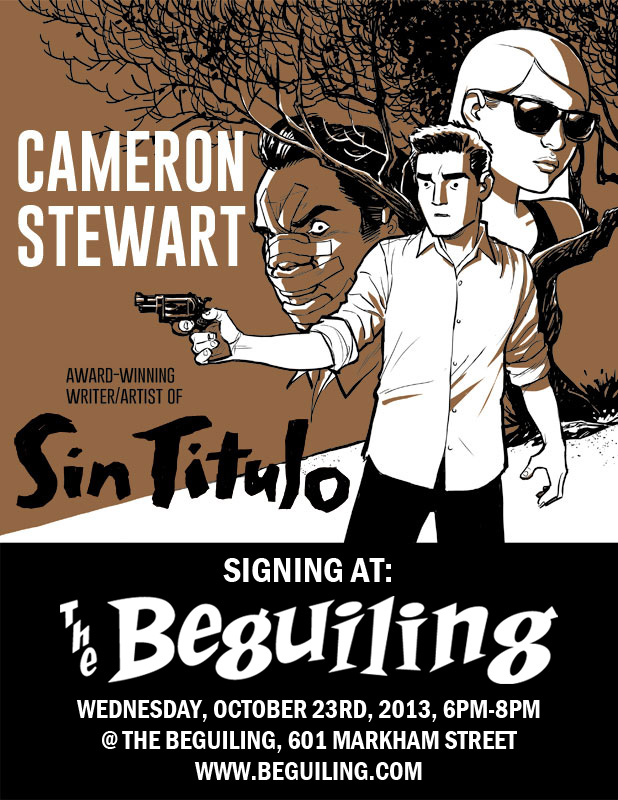 The Beguiling is proud to welcome Cameron Stewart back to Toronto, in support of his graphic novel SIN TITULO.

SIN TITULO is a dark noir crime fable originally serialized online, and now collected into a very handsome hardcover for the first time. Though it has a contemporary setting, we think this off-kilter thriller will appeal to fans of Ed Brubaker and Sean Phillips’ FATALE, as well as fans of Cameron’s past work on series like SEAGUY, CATWOMAN, THE OTHER SIDE, and APOCALIPSTIX.

Cameron Stewart called Toronto home until a few years back, when he up and moved to Montreal and eventually to Berlin. We’re thrilled to see him return to North America for this tour, and we hope you’ll come out and pick up a copy of the book!