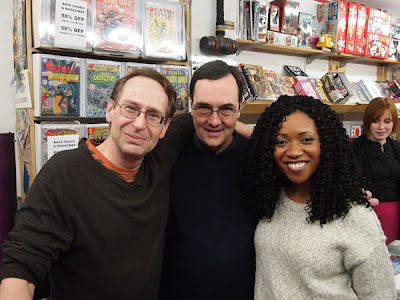 I’ve been asked that question a bunch in the last few weeks, and the only answer is AWESOME. What a wonderful signing we had with Scott Thompson on January 6th! Scott was here in support of his new graphic novel DANNY HUSK: THE HOLLOW PLANET, a send-up of the fantasy genre with a lot of smart things to say. Above you can see Scott Thompson with Mark Askwith and Natasha Eloi of SPACE, who were in the shop to interview Thompson. 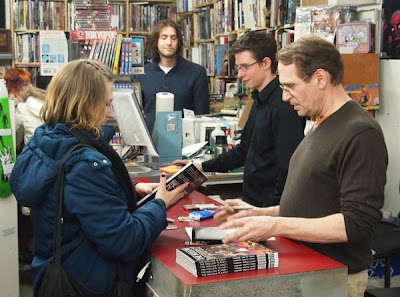 We set Scott up on the second floor for a throng of fans, and Parrish manned the cash where we sold tons of his new graphic novel. 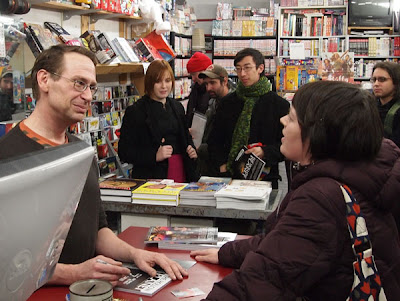 Despite some pretty crummy weather that Thursday evening, we had a fantastic turnout with more than 50 fans… and we sold every copy of the books that we had! A very successful signing. 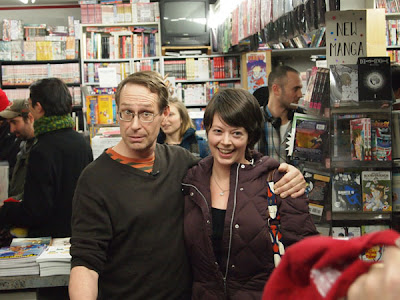 Of course Scott posed for a number of photos with fans as well, and everyone left that evening very happy for the experience. 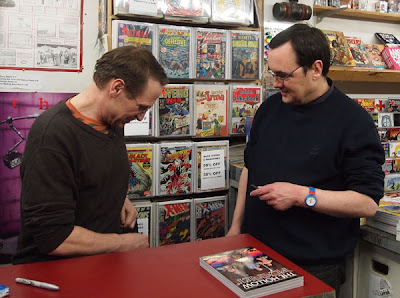 Scott was mic’d and filmed the whole time, and here we see a behind-the-scenes shot of Mark Askwith and Scott Thompson fiddling with the wireless mic. Chances are if you were at the signing you’ll find yourself on Space sometime in the near future.
And then the day was done. I got some incredibly juicy gossip about a future comics project from Mr. Cole, er, I mean Mr. Thompson, but I can’t go into that here.
But yes, Scott Thompson was a scholar, a gentleman, and a wonderful guest. We’d like to thank him for taking the time out to come and sign at the shop and delight so many of our customers. Scott Thompson’s next public appearance is this March at WizardWorld Toronto, and you can find out more information about what he’s up to now, check out the Scott Free Podcast at http://scottfreepodcast.com/.