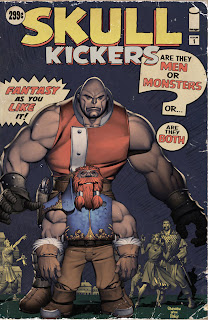 Jim Zubkavich is the Torontonian author of MAKESHIFT MIRACLE, a fun little graphic novel that we held a launch party for a few years back. Most recently, Jim came in and did an in-store signing for STREET FIGHTER LEGENDS: IBUKI #1 as he also wrote that one. Well Jim’s got his first all-new series in a few years, and it looks great! It’s called SKULLKICKERS, and the first issue is due out September 22nd from Image Comics.

Come join us at The Central on the release day, September 22nd from 7pm-9pm. Jim will be giving a short presentation, signing copies, chatting with folks, and we’ll probably even make him draw for you too! 🙂