Toronto cartooning and illustration collective SKETCHKREIG are getting together for a group show on February 3rd, and you’re invited! It’s called PAPER TRAIL, and features comics, illustration, painting and more! See you there: 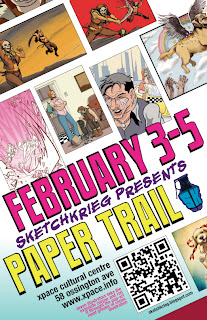 In 2010, the seven illustrators in SketchKrieg! embarked on a collaborative comic panel project. One illustrator would create one comic panel – any size, any format. That panel would be passed along to a second illustrator, who was then instructed to illustrate a new panel within the next four days. That illustrator would pass that new panel (and the original) to a third illustrator, and the cycle would continue. The sequence was illustrated one panel at a time, each illustrator unaware how the previous illustrator intended the story to progress. No plot or outline was devised before committing ink to paper. Everything was intended to be surprising and improvised. And no dialogue was allowed.