While we here at The Beguiling do try our best to get some recommendations up with the shipping list every week, sometimes that just doesn’t work out. But the last two weeks have had a bunch of new series’ of note, and a bunch of cool titles, and since I’ve got 15 minutes I thought I’d point some out to you. All of the books below are still in stock.

Adventure Time #1 (3rd Ptg)
Adventure Time #2
After a fantastic sell-out first issue, a new printing of issue #1 arrives jusssssst in time for the debut of issue #2! I really loved the first issue of this, it perfectly captures (and expands on!) of Penn Ward’s tv show, which I’m also super-digging. If you’re a fan of the show you’ve probably already picked this up, but just in case you haven’t: it’s got my personal recommendation.

Avengers Assemble #1
It’s a new, in-continuity Kirby-Lee Avengers series by current Avengers mastermind Brian Bendis, and (for the first arc at least) drawn by Walt Simonson. It’s an Avengers series that just happens to use the cast from the upcoming movie. It’s exactly the kind of thing you’d love if there weren’t like 15 Avengers series at the moment, but this one’s probably a cut above. You can also make yourself feel better about buying it by signing this petition demanding economic justice for the Kirby family, with regards to the upcoming movie: http://www.change.org/petitions/marvel-entertainment-give-credit-and-royalties-to-jack-kirby-and-his-family

Avengers X-sanction #4 (of 4)
Speaking of which, this is one of the three series that leads directly into next week’s Avengers vs. X-Men crossover/fight. If you like Ed McGuiness this has nice art and doesn’t have the problems of most of Jeph Loeb’s recent work. I know that seems like a “damning with faint praise” sort of comment, but seriously, this is the best brainless beat’em up book Marvel’s putting out, but I want you to know what you’re getting into: Cable kicks the ass of every Avenger.

Conan The Barbarian #2 Carnevale Cvr
Released last week! Brian Wood and Becky Cloonan on Conan! We had a fun signing for this one last week, and it’s really good, classic Conan stories. Of course most people think that Conan should be drawn by Buscema and noone else, and that’s going to make this book a ‘problem’ for you, but if you can get past your prejudices you’ll probably really dig this book… Plus? We’ve got signed copies of #1 and #2!

Crossed Badlands #1
Garth Ennis returns to Crossed, and according to Alex “this is consistently the best Crossed material” so there you are! If you’re curious, we’ve got free give-away comics!

Dominique Laveau Voodoo Child #1
The third new title in the Vertigo relaunch, Voodoo Child is… actually, I have no idea. We only put this on the rack 15 minutes ago. Here’s a write-up of it: “DOMINIQUE LAVEAU: VOODOO CHILD is the story of a half-breed, outcast and heir to the Voodoo Queenship of New Orleans, if she can live long enough to claim her birthright. New Orleans is the most haunted city in America: a town of centuries-old ghosts and newly drowned spirits; where vampires, voodoo spirits and loups-garous make their home. Ruling over this all are the powerful Voodoo Queens, whose influence stretches into politics, business and crime as they maintain a delicate balance between the mortal and supernatural worlds.”

Glory #24
I totally dug Ross Campell’s first issue on this reinvention of a Rob Liefeld concept. I know this didn’t exactly catch on the same way Brandon Graham’s Prophet did, but trust me, this is great superhero/adventure comics. Who would have ever thought that Wonder Woman would be one of the best books DC publishes, and this book that started off as a Wonder Woman “Homage” (outright theft) would be one of the best that Image publishes? Strange times, people. 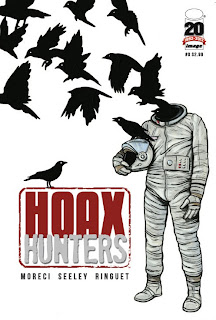 Infinite Vacation #4 (of 5)
The long awaited, long delayed 4th issue (of 5). Still, I know this really made a strong impression on a lot of folks when the first issue came out… I hope you managed to stick around to the end, it still looks pretty solid.

John Carter Gods Of Mars #1 (of 5)
It’s yet another John Carter series! But wait, this one is written by Sam Humphries, recently of OUR LOVE IS REAL and SACRIFICE, the hit self-pub’d comics, and drawn by Toronto’s own Ramon Perez, who’s turned in some of his nicest work on this series. Game on.

Justice League #7
“Fill-in” issue by an artist that is better than Jim Lee in pretty much every way, with all due respect to Jim Lee. Please welcome the gorgeous artistic stylings of Gene Ha to Justice League #7.

Kick-ass 2 #7 (of 7)
Supercrooks #1 (of 4)
And the second Kick-Ass series wraps up, just in time for Mark Millar to launch his new ongoing, SUPERCROOKS. Essentially, super villains head to London because all of the superheroes live in America for some reason. For people that love Mark Millar, this is the Mark Millarest series in a while.

Orc Stain #7
Despite a healthy order of Orc Stain #7, we sold out pretty quick, a little over a week. We’re totally sorry. But we just managed to get in a fuckload more copies this week, still first printings, for all of your beautiful-orc-dick reading pleasure. Hurray! On the new rack.

Peter Panzerfaust #1 Var Cvr 2nd Ptg
Peter Panzerfaust #2
One of the recent Image sell-out-hit-spectaculars, issue #2 came out last week, and the second printing of issue #1 just made it to our shelves as well. If you’ve been curious about this series, we’ve got you covered. 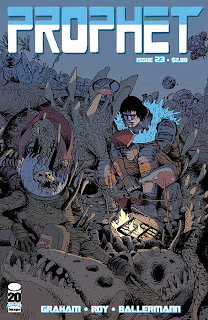 Prophet #21 2nd Printing
Prophet #22 2nd Printing
Prophet #23
Easily my favourite of the recent Image comics relaunches, Prophet by Brandon Graham and Simon Roy has been pretty amazing. Having almost nothing at all to do with the Liefeld comic that spawned this series, this is a dense, dirty read, and cover-to-cover the most satisfying monthly comic I read at the moment. We’ve got second printings of the first two issues in stock right this second, and hey, look at that, issue #23 is out this week!

Ragemoor #1
New mini-series with all new art by Richard Corben. That should be all you need to know.

Rebel Blood #1 (of 4)
Yet another Image debut, this one a zombie book (I know but give it a chance) about rural isolation, and zombie wild animals. I’m gonna give it a shot.

Saucer Country #1
Although this came out last week I haven’t had a chance to read it yet, but it’s getting great reviews for writer Paul Cornell and artist Ryan Kelly (Local). It’s about a handler for a politician that has apparently gone insane, claiming to have been abducted by aliens. It sounds like it could be a lot of fun, I’m looking forward to it.

Secret History Of D.B. Cooper #1
As mentioned here on the blog, this was a really solid first issue. More info on this here: http://thebeguilingat.blogspot.ca/2012/02/secret-history-of-db-cooper-1-pullfile.html

Smoke And Mirrors #1 (of 5)
New IDW series about street magicians. Looking forward to reading this.

Stephen King Joe Hill Road Rage #1 (of 4) 2nd Ptg
Stephen King Joe Hill Road Rage #2 (of 4)
This is a totally strange-for-mainstream-comics mini-series about a bunch of scumbag bikers who murder some people, and then begin to turn on one another. It’s very much in the vein of Stephen King’s short stories, which honestly makes it pretty weird to read in comics format. King’s Stand and Dark Tower adaptations have been solid, but those always felt pretty fantastic. This is a different animal. Worth a look if you’re a King (or Joe Hill) fan.

Thief Of Thieves #2
Haven’t read this one yet, sorry, but I thought the first issue was pretty decent. I’ll give it a go.

Wolverine And X-men #7
Probably my favourite Marvel series at the moment. It’s a totally fun, readable X-Men book that you don’t really need to know anything about the current X-verse to enjoy. I am counting down the seconds until they completely ruin it somehow, but for now? I can definitely recommend this one.

Wonder Woman is probably the best book DC is publishing at the moment that isn’t Animal Man. WEIRD, EH? Seriously though, great writer, great artist, high-stakes, humans-as-disposable-to-the-Greek-Gods stuff. I expected to enjoy this, I didn’t expect to love it. If you haven’t given it a shot don’t miss out; we’ve got all 7 issues in stock.
—
– Chris @ The Beguiling