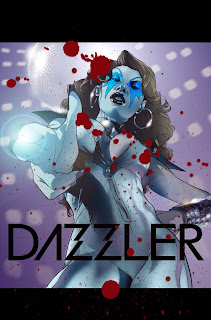 Today marks the momentous occasion of the first release of a DAZZLER #1 since the halcyon days of disco, allll the way back in 1981! Yes the roller-skating, singing, laser-light-show making mutant was a triple threat, far ahead of her time and now often a bit of a punchline, sadly. But look at that kick-ass art to the right by Toronto’s own Kalman Andrasofszky! He and studio-mate Ramon Perez knocked this new one-shot out of the park, and from what we hear the story ain’t bad either! So to celebrate the momentus near 20-year absence of DAZZLER #1’s from the stands, we’re having a special signing featuring both spectacular artists in store signing! We’re also knocking a buck off of the cover price to make it even easier to get this collector’s item* into your hot little hands. 😉

But wait there’s more!
DAZZLER #1 is part of the new Women of Marvel line of one-shots, and to celebrate we’re going to be offering previous WoM comics at just a Buck Each! That’s right, just $1! I’ve read some of these and they’re really strong, well-written and drawn superhero stories featuring female leads, and for a buck you can’t go wrong! That’s like… Boxing Day Prices! Exact mix and details in-store.
So to Recap:
– DAZZLER #1 IN STORES TODAY!
– WEDNESDAY ONLY: GET DAZZLER #1 for just $3.00!
– GET YOUR COPY SIGNED BY THE ARTISTS, KALMAN ANDRASOFSZKY AND RAMON PEREZ, FROM 5PM-7PM!
– SELECTED WOMEN OF MARVEL ONE-SHOTS JUST $1.00! (See in-store for details)
See you at the store…!
– Christopher
*Note: There are no such things as collector’s items. I was just funn’n ya. But the signing is going to be good, and hey, Dazzler #1, you practically must buy it.
=”center”>