While the holidays press ever onwards we’re actually holding up in terms of great stock on hand, regardless of what you’re looking for! In particular, while some of our signed books are getting very thin on the ground we’re pleased to report that so far everything remains in stock… but we’d hurry if you want signed copies of Death Ray, Meta Maus, and Hark, A Vagrant! if we were you.

We’ve even added three more books to the list! 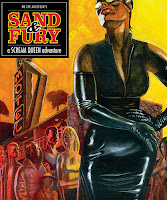 Sand and Fury: A Scream Queen Adventure, by Ho Che Anderson: A story of blood, of sex, of death—of sound and retribution. It opens as a girl by the side of a desert road accepts a ride from a stranger. How could she know that behind that wheel sits the angel of death? Of course, even the angel of death once had a life. During that life, death was a successful business woman, with a great career and an even greater future. It’s true she could be a little cavalier with her innate gifts; she had, after all, broken the heart of everyone who had ever loved her. Signed by Ho Che Anderson.

SKIM, by Jillian Tamaki and Mariko Tamaki: “Skim” is Kimberly Keiko Cameron, a not-slim, would-be Wiccan goth who goes to a private girls’ school in the early ’90s. When her classmate Katie Matthews is dumped by her boyfriend, who then kills himself — possibly because he’s (maybe) gay — the entire school goes into mourning overdrive. It’s a weird time to fall in love, but that’s what happens to Skim when she starts meeting secretly with her neo-hippie English teacher, Ms. Archer. But then Ms. Archer abruptly leaves the school, and Skim has to cope with her confusion and isolation while her best friend, Lisa, tries to pull her into “real” life by setting up a hilarious double-date for the school’s semi formal. Suicide, depression, love, homosexuality, crushes, cliques of popular, manipulative peers — the whole gamut of teen life is explored in this poignant glimpse into the heartache of being 16. Signed by Mariko Tamaki and Jillian Tamaki.

The Klondike, by Zach Worton. Drawn in an inviting, engagingly detailed style, The Klondike is the story of The Klondike gold rush which shook the Yukon on the eve of the twentieth century and stands today as the defining era in the taming of North America and especially Canada’s Great North. The history of how a handful of colorful characters sparked the largest mobilization of gold seekers in history is brought vividly to life in this debut graphic novel by cartoonist Zach Worton. Notes and introductory texts accompany each chapter, and a thorough, illustrated index of all the key players in the gold rush, as well as a glossary featuring notes about “How to Pan for Gold” and tips on how to spot the differences between “fool’s gold” and the real thing complete the book. Signed by Zach Worton