The following comics and graphic novels are scheduled to ship The Beguiling Books and Art on Wednesday March 7th, 2012. All Prices listed in U.S. Funds. Variant prices are generally accurate, but in any dispute between web price and in-store price we will defer to in-store price. 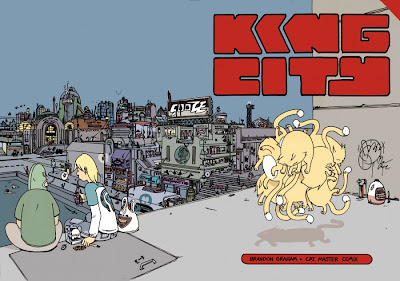 DEC110506 King City TP   19.99
Well, you can put this one squarely in the column “I never thought this would be republished… ever.” Collecting all 12 issues of Brandon Graham’s excellent far future sci-fi story, a mix of manga, indy comics, and a lifetime of Heavy Metal comics. It’s a great story about doomed romance, a great setting, and I’d recommend this to people who like good comics but aren’t too uptight about genre work. Plus: It’s 300+ pages for 20 bucks, it’s a steal and a half.

JAN121268 Blue HC   14.95
This is a very strange, very compelling comic that I encountered last year after a link from Tom Spurgeon. It’s really stayed with me, though with its non-human characters and air of menace I feel awkward saying that “I enjoyed” reading it… though on reflection I guess I did. It’s now available in an inexpensive hard cover from Top Shelf, and author Pat Grant is coming to TCAF this year too! Check out the preview at  http://www.boltonblue.com/.

DEC111077 Friends With Boys GN  15.99
Speaking of comics that I saw online, Friend Of The Beguiling Faith Erin Hicks (Zombies Calling, Brain Camp) releases her new graphic novel! It’s a semi-autobiographical tale, and the story and art are great–fans of Faith’s other work as well as recent books like Anya’s Ghost will really dig it. Make sure to check it out, and you can check out a preview at  http://www.friendswithboys.com/

JAN120327 Fairest #1  2.99 – For Fans of FABLES
The heavily-promoted spin-off of Bill Willingham’s Fables is the new Fairest, with art on the first arc by Phil Jimenez and Andy Lanning that looks lovely. Willingham writes the first arc, followed by a rotating cast of top-tier creators.

JAN120690 Age Of Apocalypse #1 2.99 – For Fans of UNCANNY X-FORCE
Remember that recently well-received arc of Uncanny X-Force that had the team head to the Age of Apocalypse? Well find out what happens next in that alternate continuity.

JAN120501 Hell Yeah #1 2.99
A brand new series from Image Comics, Joe Keatinge, and Andre Szymanowicz. The high concept is that, well, it doesn’t really translate. I mean, this is the comment: “Twenty years ago, the first-ever superheroes debuted without warning and forever altered our global culture! Now, the generation born in their wake fight to claim their place in a world evolved beyond them!”. I’m not really sure what to do with that, but I like the cover and I love the title, and a high-energy superhero comic about a generational struggle? I’m willing to give it a go.

NOV111116 No Longer Human GN Vol 03   10.95
The finale of TCAF2011 guest Usumaru Furuya’s adaptation of one of the bestselling Japanese novels of all time. I’ve been waiting for this so I could read the whole thing at a go, I’m really looking forward to settling down with this short series.

DEC118111 Shonen Jump April 2012 4.99 – LAST ISSUE
The very final issue of Shonen Jump. I gotta say, this is a pretty sad day for me. Shonen Jump launched right around when I first started working at the store, and I’m sad to see it go. While I’ll probably write up a proper eulogy for it on my blog later this week, I think it’s safe to say that this will go down as the last great outreach of comics to children, and the most successful modern example of same.

NOV110038 Compleat Terminal City TP  24.99
– This collects the beautifully illustrated two Terminal City mini-series from Vertigo from days past. Gorgeous art from Michael Lark throughout, a neat retro/future story from Toronto’s Dean Motter, a really neat book all around. If you didn’t read it the first time around don’t miss this.

Here’s a great selection of comics I’m reading every month, or when they come out.