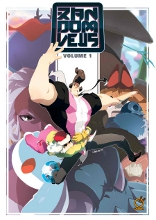 The following comics and graphic novels are scheduled to ship The Beguiling Books and Art on Wednesday August 24th, 2011. All Prices listed in U.S. Funds. Variant prices are generally accurate, but any dispute between listed price and in-store price will defer to in-store pricing.

PLEASE NOTE: Due to a shipping error on Diamond’s part, the following new comics were not in our shipment this week; This has been reported to Diamond, and we should have replacements in next week’s shipment: 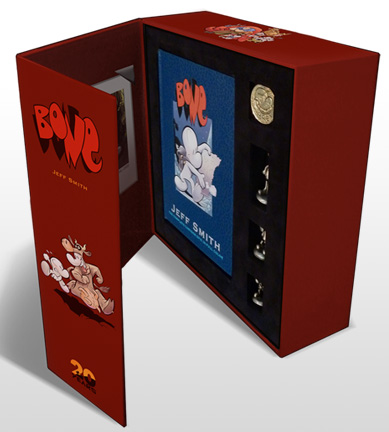 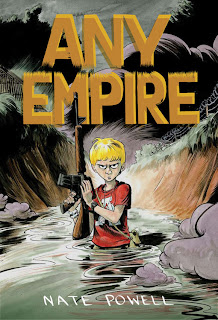 MAY111196 Any Empire HC  19.95
– I’ve greatly enjoyed all of Nate Powell’s work to date, and his most recent, Swallow Me Whole, was probably his most poigniant, important, and affecting work to date. Powell returns with Any Empire, a treatise of teen violence, guns, and America… it’s going to be an amazing book.  and I am looking forward to this one even more.

MAY111079 Like A Sniper Lining Up His Shot HC  18.99
– A new one from Jacques Tardi, an extrordinarily bleak noir thriller. If you’re digging Criminal and want to know what to read next, don’t miss Tardi’s work–he’s a master of the form.

APR111036 Mome GN Vol 22 Spring 2011 19.99
– The FINAL volume of MOME, the great white hope for aspiring cartoonists to get published at Fantagraphics. An excellent overall anthology with moments of true greatness–the comics industry is much poorer for the loss of this fine publication. Our sincere thanks to Fanta and Eric Reynolds for 22 volumes of this series. We highly recommend them.

JUN110412 Rocketeer Adventures #4 (of 4) 3.99
– The final issue of this excellent mini-series, with some of the best illustrators in the biz paying homage to Dave Stevens and his creation. This issue includes art by Scott Hampton, Tony Harris, Brendan McCarthy, and pinups by Ashley Wood.

JUN110559 Skullkickers #10 2.99
– Our very good friend Jim Zub’s SKULLKICKERS makes it to issue #10, thereby beating Battle Chasers in the issue numbering sweepstakes. So it’s sticking around is what we’re saying. So give it a shot! Oh, and if you need further incentive, Jim and series artist Edwin Huang were in the store last week and signed up all of our back issues, and I think we’ve got #1-#9 in stock now!

Also of Note:
JUN110010 Angel & Faith #1 Jo Chen Cvr  6.00
JUN110009 Angel & Faith #1 Steve Morris Cvr  2.99
– Angel makes the jump from IDW to Dark Horse in this ‘cannon’ story, plotted by Whedon and written by Christos Gage. Nice art on this one from Rebecca Issacs too, and this series will run in parallel to the upcoming Buffy Season 9. If you’d given up on the previous Angel series but kept grabbing Buffy, don’t miss this one.

MAY110045 Chimichanga HC  14.99
– Eric “The Goon” Powell’s incredibly weird book about a little girl and a circus freakshow gets a lovely and inexpensive hard cover collection. I know some of the “Goon” regulars missed out on this, check it out now that it’s only $15!

JUN110888 Chronicles Of Wormwood Last Battle #6 (of 6)   4.99
– This is the long, long-delayed conclusion to Garth Ennis’ epic battle between Heaven & Hell. Looking forward to seeing how it ends.

MAY110050 Last Dragon HC 29.99
– This is a gorgeously drawn, full colour fantasy graphic novel from acclaimed author Jane Yolen (Owl Moon, Sword of the Rightful King) and celebrated fantasy artist Rebecca Guay (Magic: The Gathering). This is really, really pretty if you’re into that sort of thing.

– Boom Studios with 2 brand new $1 books this week! First up, jump on board with their new Planet Of The Apes book (I heard the new movie was decent), and the continue along with a new gritty crime drama from Gary Phillips.

APR111062 Route Des Maisons Rouges #5 (of 6)  2.99
– This series has picked up a number of fans here at the shop despite its incredibly irregular schedule. Just a reminder that there’s a new issue now in!

– Congrats to Scott Chantler on the second volume of his excellent all-ages fantasy adventure series Three Thieves. Looking for something for yourself or your kids now that Bone has finished? Check this series out, you won’t be disappointed.

APR110340 Transformers Classics TP Vol 01 24.99
– I’m a Transformers fan from way back… Waaaaay back. They were the first comics I ever read. So the fact that this volume reprints Issues 1-13, inclusive, INCLUDING THE SPIDER-MAN crossover…? And it’s 300+ pages? And… and it’s got Optimus Prime and not that stupid Michael Bay robortion. Anyway, yeah. I don’t often feel the need to re-buy my childhood but, sadly, I am making an exception in this case.