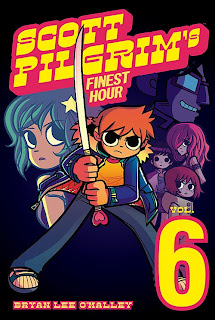 Hey folks! Congrats to the winners of our Scott Pilgrim Final Round Contest! Caspar and Melissa both received awesome Scott Pilgrim Vs. The World Prize Packs which included:

That looks like our last Scott Pilgrim contest… until at least November. 🙂

Although the talk is that the SP movie didn’t do as well as expected, blah blah blah, really I just wanted to say how totally awesome it’s been for us to be a part of the whole phenomenon. We all loved the movie, and we’re super proud of Bryan Lee O’Malley, Edgar Wright, Oscar Wright, and all of the great cast and crew we’ve been fortunate enough to meet over the past 2 years. The graphic novels continue to sell phenomenally well and we’re still turning new readers onto the series every day! Long live Scott Pilgrim. 🙂

Thanks to everyone who entered our contests, came out to our events, saw the film and read the books, it’s been great being part of something so awesome for Toronto and its comic fans.