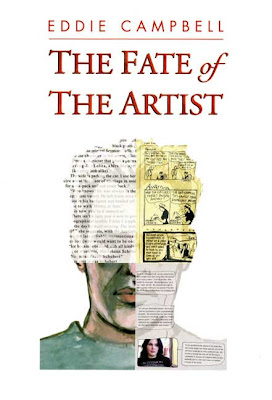 We’ve decided not to wait until Boxing Day to offer certain items up for sale and we’ve started with an excellent and somewhat overlooked release of the past 5 years, Eddie Campbell’s The Fate Of The Artist. One of the books in First Second Books’ debut line, The Fate Of The Artist is a rumination on the nature of art and creation, biography and autobiography, and the role that the artist plays in the world around him or her. It’s a really solid work, and we’ve ended up with slightly too many, so we’re happy to offer this fine work to you for just $10. The Canadian list price is $21.95, so this is a substantial savings on a book we can personally recommend. Makes a good gift for the graphic novel fan in your life as well…

To entice you further, what follows is a review that I (Chris) wrote after the book’s release in 2006. As you can see, I found it quite thought provoking and enjoyable.

The fate of the artist is for him to disappear, or to reinvent himself, or both. The Fate of The Artist, on the other hand, is a considered graphic novel wherein creator Eddie Campbell examines his life and his art and finds it all lacking, and chucks it out the window.

The vast majority of people encountering this graphic novel will know Campbell as the artist of From Hell, his collaboration with Alan Moore. They may have even encountered his long-running comic series Bacchus, about the somewhat-deposed God of drinking, and said God’s wanderings through the world. But for my money, Campbell’s real strength lies in his autobiographical works, both real and veiled. Campbell’s comix stand-in is Alec MacGarry who has to date starred in three excellent graphic novels: Alec: The King Canute Crowd, Alec: Three Piece Suit, and Alec: How To Be An Artist. In his previous (and previously most recent) graphic novel After The Snooter, Eddie Campbell takes off the ‘Alec’ disguise and addresses us directly, primarily on the subject of his anxiety at approaching middle-age. It is a step forward for Campbell as an artist and storyteller, the last chapter of the ‘Alec’ saga, with the artist finally having come in to his own. So what is The Fate of The Artist then? Why, it’s the epilogue of course.

If this seems to be an awful lot of set-up to even get to the book I’m ostensibly reviewing, well it is actually. You’re entirely correct. The weight of Campbell’s publishing efforts, his art, and his life in comix, is felt on every page. It’s felt on the very first page in fact, on which the artist tells us to “all go to fuck,” sick of comics and himself and you, too. It is the only time we see Eddie Campbell as ‘himself’ in this graphic novel, with the image of the artist played by an “actor” for the rest of the book. Campbell’s got another mask on (or more properly, someone’s got a Campbell mask) and we’re back to the artist’s life a step-removed. In fact, page three introduces a detective investigating Campbell’s disappearance from the narrative. The graphic novel is an autothanatography; the paradox of being both about him and about not-him; what comes after the
autobiographies are over. Confused? Don’t worry, from page three on the book becomes much more straight-forward.

The Fate of The Artist is told through Traditional Comics, yes, but also through: fumetti (photo-comics); comic strips; diagrams; and illustrated text pieces – all more ubiquitous forms than The Graphic Novel, with which the general public is likely less familiar. It makes for an interesting reading experience; Campbell uses these methods to communicate information relating to the themes and plot of the graphic novel akin to a poet or songwriter using an apt metaphor or striking turn-of-phrase to communicate a deeper intent. Digressions like the 1920s-style comic strip “Honeybee” comment on marital fisticuffs in the general, but when juxtaposed with the character in the main narrative representing Campbell’s wife, an emotional clarity regarding their relationship reveals itself and the digression is elevated in status to ‘integral’. Campbell has thrown off the shackles of the panel-page-grid (and after doing 500+ pages of From Hell in that style he’s earned the right) and managed to turn the result into a surprisingly readable book.

So if form is no obstacle to the various and sundry new readers to be gained from the promotional push this graphic novel is getting as part of publisher First Second’s debut, is the subject matter? I’m honestly not sure. As I’ve written, the enormity of all of Campbell’s past works (save perhaps Bacchus) weigh on this graphic novel. His history as a comics artist is integral to the murder mystery that is the framework for the story. His autobiography (real and veiled) and its effects on his family and friends provide the hook, the emotional core, and eventually the resolution. While Campbell does a good job of introducing his situation and surroundings to the reader in this book, I can’t imagine a reader inexperienced with Campbell’s oeuvre drawing much from the story other than that he’s a prat who may have managed to have some sense knocked into him in the end. (I’d be wrong, incidentally. Read the postscript.) I could end the review right here, saying that the book is innovative, and a fulfilling read that will engage most of the readers that pick The Fate of The Artist up off of the crowded graphic novel shelves. But the book offers much more to those of us who’ve followed Alec’s journeys since their inception, and so should this review I think.

Incidentally, you might want stop reading now if you don’t want the plot ruined for you.

The Fate of The Artist is that his tendency to write his family and friends into his comics, putting words into their mouths and their likenesses into embarrassing situations (real or imagined) gets him killed. His long-suffering ‘best-mate’ kills him and stuffs the body onto the library shelves under the dewey-decimal code for graphic novels. You can’t help but feel that after being told to “go to fuck” on page one, followed by 79 pages of the artist’s family painting a picture of him as an ass, that he got what he deserved. The whole book is Campbell slicing open his own stomach, pulling out the entrails and reading the guts to divine the future; it isn’t a pretty picture, for you to think about or for Campbell either. Is this book Campbell owning up to his missteps? An apology to those who felt wronged? Or just recognition, with a promise of change? Again, it’s tough to say.

Almost immediately following the grand reveal of the artist’s untimely demise, Campbell (as portrayed by an actor) gets a face-to-face with God, who ultimately validates all of his thoughts and feelings on the nature of the universe, in a scene drawn and painted by Campbell. Must be nice! Immediately following that though is the final storytelling shift; a Classics Illustrated-style retelling of O. Henry’s The Confessions of a Humourist, staring Eddie Campbell in the lead roll. It is the story of an unassuming man who becomes a professional writer of humour, eventually sucking the joy out of all of his relationships as he doggedly pursues family and friends for material. In the end, the humourist recognizes the value in being a husband and father, putting his typewriter into the service of bookkeeping at a funeral home.

Does this mean the end of Eddie Campbell: Comic Book Character? Or perhaps more importantly to Campbell’s health-and-well-being, the end of Eddie Campbell’s Friends and Family: Unwitting and Unwilling Comic Book Characters? I kind of hope so, actually. Not because I’m bored of the adventures of Alec, Eddie, or whichever actor they rope into playing Campbell on the page; just the opposite really. I could go on reading graphic novels from Eddie Campbell of this quality more-or-less indefinitely. But The Fate of The
Artist is such a clear epilogue, a bookend to the life of the aspiring young mini-comics creator introduced in the first Alec stories, that it would be a shame to let his death on the page go unobserved.

Post-script: I wasn’t personally sure if the audience for this work was constrained solely to those readers who were intimately familiar with Mr. Campbell’s oeuvre, and so I asked my husband Andrew to read it. At the time (2006) he’d only read 3-4 grapic novels prior, and he really enjoyed Fate Of The Artist. He specifically enjoyed it for its exploration of the themes of the artist’s relationship to his art, and for the biographical and meta-biographical nature of the work. So, shows what I know. I’d say The Fate Of The Artist is in fact very accessible for the uninitiated, at least so long as they’re at all interested in the nature of art and creation.

Post-Post-Script: In the intervening years, all of Eddie Campbell’s ‘Alec’ work, including After The Snooter, was collected in one massive tome entitled Alec: The Years Have Pants, which is also available in store now.