This week, Humanoids will at re-release Jodorowski and Mobius’ Sci-Fi Masterpiece The Incal in a gorgeous new complete collection, with the original colours. While this material was released in a very limited, oversized edition late last year, this new hardcover will be standard-comic sized, and a very budget-friendly $45. In honour of this new release, John Anderson has penned this appreciation of the series. – Chris 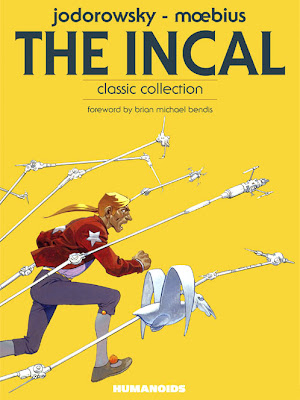 It’s the story of John Difool, a lowly private investigator who lives in a Blade Runner-style huge underground city where the aristocrats live at the very top, and the city’s undesirables live down at the bottom, near the acid lake. John’s life is dull until he discovers a strange artifact that everyone wants, including the rebel forces, the president, and the shadowy guild of technopriests. The artifact is the Incal, and it will lead John on a journey across worlds and dimensions while he learns to fight, love, and dream, before he discovers the truth about the universe and himself.

Along the way John will meet a colourful group of characters: the mercenary assassin called the Metabaron; Anima, the woman who John feels he has known his whole life; the child Solune who has a great destiny, and the monster Wolfhead who can’t let go of his animal nature.

It’s also part political satire and spiritual journey. It’s a world where the ruling class harvests organs to feed their dark gods, and where the workers are entertained by suicides and game shows. In the midst of the corruption and intrigue, the Incal shows John how to cultivate his better nature.

Jodorowsky’s overactive imagination always gives Moebius something new to draw, resulting in the perfect collaboration. And from giant robotic shadow spiders, to a forest of crystals, to giant jellyfish, to an arena battle between thousands of warriors, to scenes that take place entirely within characters’ minds, Moebius is always up to the challenge. What I love about Moebius’s portrayal of John is that his appearance changes depending on his state of mind. When he’s doing something despicable, he looks ugly. When he’s a hero or possessed by the spirit of the Incal, his face is smooth and noble. And since the story took almost ten years to complete, there are significant changes in the art style along the way. The last few volumes are drawn in what Moebius calls a more “American” style, with lots of bleeds and off-kilter panels.

And Jodorowsky has said that Moebius helped him slow down the pace, to give the characters and the readers time to breathe. I like to think that Moebius’s influence helped to retain the human scale and prevent the story from centring on ideas instead of characters, which can be a problem with some of Jodorowsky’s other work.

The story itself is mad – mad as in constantly surprising the reader with new ideas, new characters and new threats. What begins as a small mystery quickly leads to a full-blown revolution – and the story has hardly even started. As it continues, the stakes are raised again and again, and the threats faced by John and his friends grow ever larger. But we never lose the human scale: although John is the hero, he is cowardly and sometimes foolish, and it takes his friends’ coaxing to bring out his better nature so he can do what’s right.

“The Incal began as a dream,” wrote Jodorowsky. And it reads like a dream: a perfect collaboration of two of the greatest comic creators.