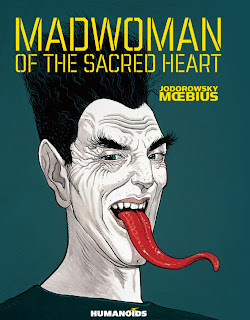 “Insanity, divine madness, is the only way to salvation.”

I guess I’ve been reviewing a lot of Alejandro Jodorowsky’s books lately. There’s a reason for this: Humanoids has been releasing a lot of them, and they’re wonderful. The latest is the softcover edition of Madwoman of the Sacred Heart.

Alan Mangel is a successful and popular philosophy professor whose students treat him like a rock star: female students wear purple, his favourite colour, to show how much they admire him. Anyway, things start to go wrong for Alan when his wife divorces him on his birthday. Then one of his female students, Elisabeth, announces that they will have a child together, a second John the Baptist who will lead the world to a new saviour. Although he thinks Elisabeth is mad, Alan lets his animal instincts take over and is drawn into her insanity. Soon Elisabeth is pregnant, and she takes Alan on a quest to find Joseph and Mary – who turn out to be nothing like Alan expects. But by then it’s too late to turn back. Alan keeps trying to appeal to reason, but reason becomes less and less useful in this world of prophets and mystical revelations.

Madwoman has some interesting similarities with Jodorowsky’s and Moebius’s most famous work, The Incal: in both stories the protagonist keeps getting drawn into faith, but his cowardice or skepticism keeps preventing him from taking part fully. This book is much more mundane in setting than Incal: it’s set in France, not outer space, after all. But the earthly setting lets Moebius concentrate on the characters. This book shows off Moebius’s fantastic talent for depicting the characters’ inner lives. In every panel, Alan looks different – frustrated, angry, joyful, doubtful – rarely have I seen such an incredibly wide and constantly changing range of emotions expressed in comic art.

There are changes in the artwork over the course of the story. The detailed dark reds and purples in the first volume are replaced by a looser, more cartoony style and bright yellows and golds in the second volume, as the characters move to sunny southern France. The leisurely pace of the first two volumes gives way to the hectic, crammed pace of the third, with many small panels crammed into each page, as the story moves to South America and gets weirder and weirder. The end of the last volume draws on Moebius’s interest in Native American art and iconography.

In terms of the plot, Madwoman, like Incal, is completely mad. Mad as in constantly surprising the reader with dramatic changes in plot and character. By the end of the story all of the characters have changed utterly, both physically and spiritually. Some readers will like how Alan looks a lot like Jodorowsky himself, and how Alan’s journey echoes so many of Jodorowsky’s spiritual interests. If you’re of a more skeptical bent, you’ll like the story for Jodorowsky’s constant mad ideas.

Madwoman of the Sacred Heart is what comics should be: unapologetically outrageous and beautiful.