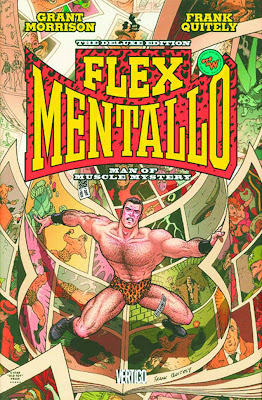 “Clap your hands if you believe in superheroes!”

The secret origin of Flex Mentallo was revealed in Doom Patrol #42 when a skinny geek was transformed into a Golden Age body-builder by using the power of muscle mystery. Flex was selfless, naive, and pure – anything could be overcome simply by flexing his muscles.

The cover of the first issue of the Flex Mentallo mini-series, three years after Morrison’s Doom Patrol ended, featured Flex reaching out toward to reader, commanding them “YOU! BUY THIS COMIC NOW OR THE EARTH IS DOOMED!” This was not the Mentallo of Doom Patrol. It was something much weirder and much more wonderful. Flex Mentallo is the entirety of The Invisibles condensed into four issues. It’s more than just a comic book; it’s a fantastic book about comic books. It’s an attempt to make first contact with this absurd and magical thing we call superhero comics.

As Flex tries to track down his missing teammate The Fact, he travels from the Golden Age to the Modern Age, discovers the seedy underside of superheroes where rejected sidekicks roam the back streets like droogs, and where adult superheroes go to indulge their super fantasies, and at the end he discovers the secret origin of everything. He is helped by the hard-boiled police lieutenant who doesn’t believe in superheroes any more, and my favourite character, a supervillain called the Hoaxer. The Hoaxer sports one of those silly but somehow archetypal question mark logos, and his greatest hoax just might be reality itself.

Mentallo’s story is being told by a dying musician in an alley – Wallace Sage, a version of Grant Morrison from an alternate Earth where he remained a musician instead of becoming a comic book superstar. Sage created Mentallo when he was a kid. Sage’s altered-state rants about comics coincide with the adventure Flex is going through. Sometimes Sage is telling Flex’s story, and sometimes their narratives are happening in the same world.

And then there are the superheroes themselves, like Lord Limbo and G-Whiz, Nanoman and Minimiss, larger than life archetypal ideals who have formed the mighty Legion of Legions. But the polyverse is being threatened by the ultimate destroyer called the Absolute. The Legion of Legions has a last-minute solution: to make themselves fictional in a new kind of reality. And when superheroes make themselves fictional, where do they go? That’s right – they go into comics. Our comic books are attempts to remember and transcribe the reality of the gods.

This book is a trip from beginning to end. The detail in Quitely’s art is incredible. His full-page panels of hordes of caped figures swooping out of the sky give me shivers. There’s an eerie sequence of superbeings floating through space toward a terrified astronaut. There’s a sequence where the Legion of Legions appears to have set up headquarters inside someone’s brain. On every page he draws something either completely impossible or so intricately detailed he must have spent days on it. The story and art work together so that, fractal-like, new details are revealed on each rereading.

Flex Mentallo is one of Morrison’s best works and one of the best comic books ever. But what do I know – I love superheroes.