Now available in-store in a gorgeous, limited edition oversized slipcase hard cover with the original colouring, The Beguiling’s John Anderson makes a case for why you should pick up this classic! 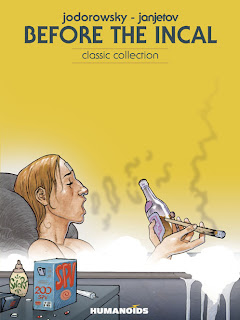 Originally published between 1988 and 1995, Before the Incal is the prequel to Jodorowsky and Moebius’s sci-fi masterpiece The Incal. Before the Incal, by Jodorowsky and the Serbian artist Zoran Janjetov, tells the story of a young John Difool and the adventures he had before he encountered the Incal. In his training to become a detective, John inadvertently stumbles on an incredible conspiracy that encompasses all levels of power. In uncovering the conspiracy, he loses his parents, travels from the lowest to the highest levels of society, becomes a terrorist and a television celebrity before he finally becomes a class “R” detective, and is betrayed by the people he trusts most.

I can’t lie to you: this is a very expensive book. But it’s the first time this work has been published in English in the original colouring. And it is a limited edition deluxe hardcover with slipcase. And it gives us a whole new series of adventures in the world of The Incal, in Jodorowsky’s mad storytelling style.

Jodorowsky fleshes out the corrupt, bleak city-shaft he created with The Incal, the city where John grew up. The entire story takes place here, but there is no lack of inventive locations and characters. Aside from John and his pet Deepo, most of the characters are new. There is John’s prostitute mother and thieving father. There is Kolbo-5, the renegade cybo-cop who becomes John’s spiritual mentor. And there is Luz, the aristocratic woman with whom John has an intense and forbidden relationship. There are some very emotional moments, such as when John loses his father, who has been brainwashed into a bloodthirsty soldier. As for villains, the city is ruled by the Supra-Divinoid, a huge cybernetic brain with a really bad temper. And Divaloo, the TV presenter who makes a brief appearance in The Incal, gets expanded into a chilling villain.

It’s a very dark, bleak story. In this world, love is unknown, and suicide is entertainment. Mothers give drugs to babies to stop them crying, and live steaks eviscerate the cooks. There is a glut of entertainment, and the populace is so jaded that terrorist attacks are a welcome diversion. Jodorowsky’s trademark storytelling style, where he is constantly raising the stakes and constantly surprising the reader with new ideas and new plot twists, is on full display here. John’s attempts to get to the bottom of the vile conspiracy get more and more dangerous, and the attempts by those in control to cover it up get more and more extreme. John joins an terrorist cell and ends up as a holovid star in the next chapter. If you’ve read some of Jodorowsky’s other works, like The Technopriests or The Metabarons (both of which are set in the same universe as this book), then you know what to expect.

The dark humour is juxtaposed with Janjetov’s bright reds, yellows and blues. Janjetov’s art is very reminiscent of Moebius’s, particularly with how he adds texture and detail to the decaying city. His grotesque character designs suit the story perfectly. In fact, Moebius chose him to colour volumes 5 and 6 of The Incal, and he is the perfect choice for illustrating the further chapters in the story that Moebius started.

The Incal itself does not appear until the very end, and this is the main disappointment with this book. The end is little more than a series of contrived events designed mesh everything that’s happened in this book with the beginning of The Incal. This is unfortunate, but the epic scale of the adventure and emotion that have gone before make up for this. This isn’t simply a prequel; Jodorowsky and Janjetov have created a whole new life for John Difool. It’s a constantly evolving science fiction mystery with a good helping of social satire.