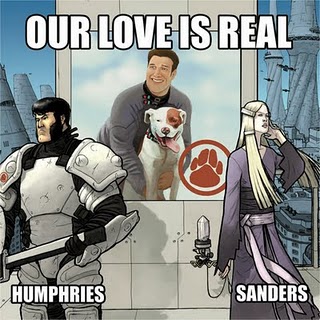 A new self-published comic called “Our Love Is Real” made its debut Tuesday and, promptly, blew up the internets.

Being by our good friend Sam Humphries, he actually set us up with copies. I did a modest order (expecting to do a couple of reorders over the summer) but BLOWED UP THE INTERNETS and now we are out of stock on this fine comic book.

But don’t worry! Sam has winged us another batch of copies, arriving likely at the end of next week, or perhaps the beginning of the next.

We also plan to keep this fine piece of comics literature in stock for as long as Sam keeps it in print, so copies should be available for the foreseeable future.

Thanks to everyone for the interest in the book, and congratulations to Sam and his collaborator Steven Sanders on blowing up the internets with their project.