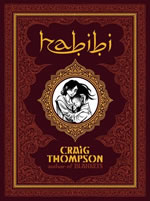 Craig Thompson’s long-awaited, highly anticipated follow-up to BLANKETS is will make its debut on September 20th, and just 2 days later he’ll be in Toronto to celebrate!

Please join us in welcoming Craig Thompson to Toronto to launch HABIBI, a sprawling and epic love story that is sure to be one of the most-talked about books of 2011. Thompson will be giving a presentation from HABIBI that will take us behind the scenes of its gestation and creation, and he will then be interviewed on stage, with a moderated Q&A and a signing to follow. This will all take place at The Toronto Underground Theatre, an exciting indy theatre and event space on Spadina between Dundas and Queen.

Admission and Book Purchasing:
Admission to this event will be $10, or free with the purchase of HABIBI at the event or in advance of the event at The Beguiling. Tickets for the pre-sales of HABIBI are on sale now, in-store only, for $30 CDN.

Those purchasing the $10 Admission will be given a $10 gift certificate for The Beguiling, good until December 31st 2011.

About HABIBI:
Sprawling across an epic landscape of deserts, harems, and modern industrial clutter, Habibi tells the tale of Dodola and Zam, refugee child slaves bound to each other by chance, by circumstance, and by the love that grows between them. We follow them as their lives unfold together and apart; as they struggle to make a place for themselves in a world (not unlike our own) fueled by fear, lust, and greed; and as they discover the extraordinary depth—and frailty—of their connection.

At once contemporary and timeless, Habibi gives us a love story of astounding resonance: a parable about our relationship to the natural world, the cultural divide between the first and third worlds, the common heritage of Christianity and Islam, and, most potently, the magic of storytelling.