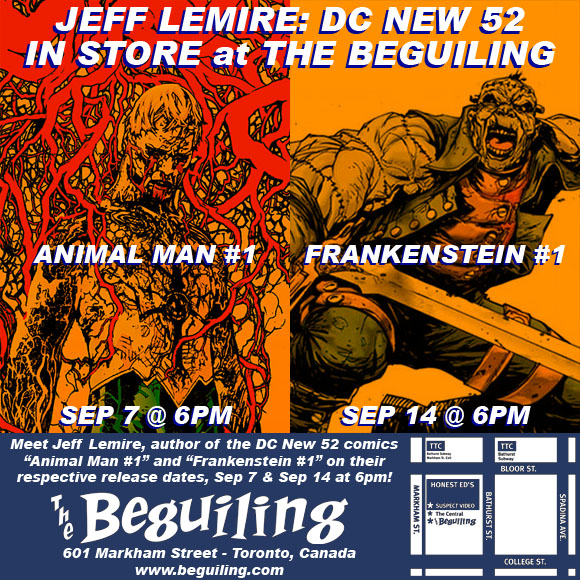 This September, DC Comics will relaunch their entire universe with brand new first issues! 52 books in 4 weeks, 2 of those new #1s are written by Toronto’s own Jeff Lemire! Please join us in supporting and celebrating the work of Mr. Lemire with two signings on two consecutive weeks, each featuring a brand new book…!

On September 7th at 6PM, Jeff Lemire will be on hand to sign copies of ANIMAL MAN #1! Here’s what it’s about: “Buddy Baker has gone from “super” man to family man – but is he strong enough to hold his family together when Maxine, his young daughter, starts to manifest her own dangerous powers? Find out in this dramatic new series!”

On September 14th at 6PM: Join Jeff Lemire in store as he signs copies of FRANKENSTEIN: AGENT OF S.H.A.D.E. #1: “It’s Frankenstein as you’ve never seen him before! Frankenstein is part of a network of strange beings who work for an even stranger government organization: The Super Human Advanced Defense Executive! But can he protect the world from threats even more horrifying than himself? And since he’s vilified for who and what he is, will he even want to take on this mission?”

Jeff will be on hand both days to sign copies of all of his work, including his acclaimed series Sweet Tooth and his graphic novels The Nobody and Essex County.

Thanks to Jeff for participating, and we’ll see you on the 7th and 14th!