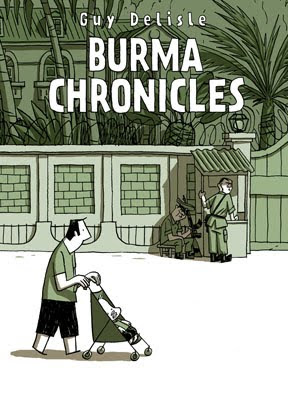 The G20 is coming to town this weekend, throwing all of our lives outta whack. Luckily The Beguiling is located safe and sound up here at Bloor Street, so we’re spared everything but the traffic jams. And really, unless you’re going out to protest why would you wanna leave the house at all? It’s gonna be hot and noisy and trafficy and… yeah, time to curl up in the A/C with a good book. So we give you:

THE G20 20% OFF SPECIAL
20 Graphic Novels at 20% off for your reading pleasure
The following graphic novels will be 20% off their regular price between now and Wednesday June 30th! All of them are generally recommended!
1. Burma Chronicles, by Guy Delisle
2. Pyong Yang, by Guy Delisle
3. Shenzhen, by Guy Delisle
If you haven’t caught up with Delisle’s “Oppressive Regime” trilogy yet, now’s the perfect time! Delisle’s sharply-observed cartooning chronicles day-to-day life in unfortunate and/or politcally unstable circumstances. Get fired up!
4. Disaster + Resistance, by Seth Tobocman
“Disaster and Resistance outlines pressing social and political struggles at the dawn of the twenty-first century—from post 9-11 New York City, to Israel and Palestine, to Iraq and New Orleans.”
5. DMZ Vol 01 On The Ground, by Brian Wood and Riccardo Burchielli
6. DMZ Vol 02 Body Of A Journalist, by Brian Wood, Riccardo Burchielli, and Kristien Donaldson
7. DMZ Vol 03 Public Works, by Brian Wood and Riccardo Burchielli
“Set in a near future where a second American civil war rages, a lone journalist is stranded in the middle of New York City, now a brutal no-man’s-land. Mirroring current events, DMZ is an unforgiving look at what a ‘war on terror’ can do to a civilian population.” I bet all those folks who live at Spadina and Front have a _very_ good idea what having your neighbourhood turned into a fenced-off no man’s land is all about!
8. Neil Young’s Greendale, by Josh Dysart and Cliff Chiang
A story about responsibility, war, the environment, and more, all spun off of the politically and socially conscious album/movie by Canada’s own Neil Young.
9. Body World, by Dash Shaw
It’s a fucked-up dystopian future that’ll do your head in! Read it now, live it later!

10-19. Dragon Head Volumes 1-10, by Minetaro Mochizuki
Picture this: You’re a 14 year old boy, not too popular, not a geek, coming back from a field trip with your class on the train. Just as the train enters a tunnel you see a flash of light outside, and then a massive earthquake derails your train under the mountain. There’s a cave in. No light. All of your classmates are dead… except for a very badly hurt girl you know, and the brutally teased sociopath nerd kid slowly going insane. The temperature is rising, you’re running out of air, and there’s no way out.
And that’s just the first volume.
Now _that’s_ a disaster.
20. HO! The Morally Questionable Cartoons of Ivan Brunetti
Sometimes you just gotta laugh. Or cry.
—
– Chris @ The Beguiling