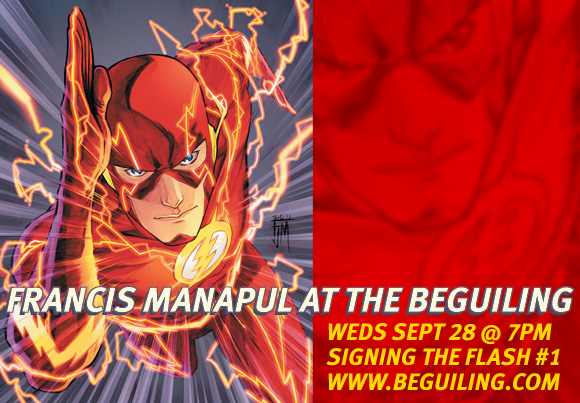 When Barry Allan made his first appearance as The Flash in 1956 it heralded the silver age of comics. In 2011, when Barry Allan makes his return to The New 52, can we expect similar greatness? With Fancis Manapul at the helm, it’s a sure bet.

On September 28th at 7 PM, Francis Manapul will be on hand to sign copies of THE FLASH #1! Here’s what it’s about: “The Fastest Man Alive returns to his own monthly series from the writer/artist team of Francis Manapul and Brian Buccellato! The Flash knows he can’t be everywhere at once, but what happens he faces an all-new villain who really can! As if that’s not bad enough, this villain is a close friend!”

We’re very happy to have Francis Manapul in store, especially for his first comic as artist AND co-writer.

Thanks to Francis for making the time to come on out. And see you in-store on the 28th.