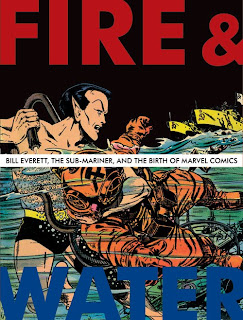 FIRE AND WATER: Bill Everett, the Sub-Mariner & the Birth of Marvel Comics
Book Launch and Discussion with Author Blake Bell
Saturday, September 25th, 4:30pm-6pm
Innis College Town Hall, 2 Sussex Avenue (St. George south of Bloor)
FREE
http://www.facebook.com/event.php?eid=150867711602264
For a Preview of this book, click this link: http://beguiling.com/firewater-8p-pre.pdf
UPDATE: We’re pleased to announce that Wendy Everett, the daughter of Bill Everett, will now be attending this book launch and discussion, and will be participating in the discussion of her father’s work. We couldn’t be more excited, and we’d like to thank Ms. Everett for participating!
In 1939, decades before it would become the powerhouse behind such famous super-heroes as Spider-Man, The X-Men, and Iron Man, Marvel Comics launched its comics line with a four-color magazine starring a daring new antihero: The Sub-Mariner, created by the great Bill Everett.
The Sub-Mariner alone, and his status as the original Marvel (anti-)hero, would have insured any cartoonist’s place in comics history. But Everett was a master of many kinds of comics: romance, crime, humor, and the often brutal horror comics genre (before it was defanged by the Comics Code Authority in the 1950s), for which he produced work of such stylish and horrific beauty that he ranks with the artists who kept the legendary EC comics line awash in blood and guts.
Written by Blake Bell (the author of the best-selling critical biography of Steve Ditko, Strange and Stranger) and compiled with the aid and assistance of Everett’s family, friends, and cartoonist peers, Fire and Water: Bill Everett, the Sub-Mariner & the Birth of Marvel Comics is an intimate biography of a troubled man; an eye-popping collection of Everett’s comics, sketchbook drawings, and illustration art (including spectacular samples from his greatest published work as well as never-before-seen private drawings); and an in-depth look at his involvement in the birth of the company that would revolutionize pop culture forever: Marvel Comics!
In celebration of this book, The Beguiling will be welcoming author Blake Bell to Toronto to discuss this new book, and the life and career of Bill Everett. Special guests may also be on hand to help us celebrate this release, keep watching this space for details…!
FIRE & WATER: Bill Everett, The Sub-Mariner, and the Birth of Marvel Comics will be available for sale at this event, alongside other classic Marvel Comics collections and previous books by Blake Bell.
—
– Chris @ The Beguiling