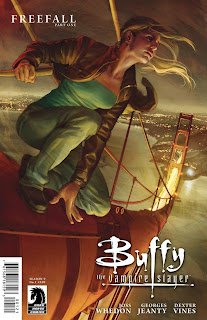 Buffy the Vampire Slayer Season 9 #1
By Joss Whedon and Georges Jeanty, $2.99, Second Floor
Buffy’s back with a new season of demons, big bads and ass kickery. Following up on the hugely successful Season Eight, Joss Whedon with Vampire Diaries writer Adam Chambliss continue the saga of the world’s only Slayer. Well, except for Faith, but we’ll get to that in a second.
Now relocated to San Francisco in a world without magic, Buffy’s back to basics: keeping a job down, finding love and staking vampires. If you skipped out on the last season of the comics, this is a great place to pick up with Buffy Summers and the rest of the Scoobies. And if you were put off by the over-the-top magic of season eight, well, they seemed to have fixed that too. In the first issue, Buffy throws a house warming party with hilarious results!
Also new and in stock and from the mind of Joss Whedon, Angel and Faith #1 (ongoing series) and Dollhouse Epitaphs #1-3 (miniseries, completed).

Fan Favourites are comics with huge followings–high degrees of craft and high appeal meet in the sort of comic that brings lapsed comics fans back into the fold, and tons of new favourites through the door. We think that these comics might just be for you!