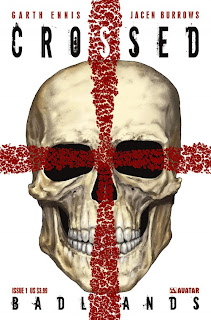 The Beguiling is celebrating the industry-wide “Crossed Day” on Wednesday, March 14th, the day that the new biweekly (meaning twice-monthly) ongoing Crossed: Badlands series debuts, written by creator Garth Ennis and drawn by Jacen Burrows. We will have copies of the “Crossed: Get Infected” promo book to give away to anyone who’d like one, and the first 15 people to purchase a copy of Crossed: Badlands will get a Crossed Button and a Crossed Temporary Tattoo.  Everyone who buys Crossed: Badlands will be entered for a chance to win 1 Crossed Poster and 1 Crossed: Badlands Retailer Edition Rare Variant. Ballots will be available in store on March 14th, pullfile customers of crossed are automatically entered. Details in store.

About Crossed: CROSSED is easily the most disgusting comic being released into the industry; a monthly blood orgy featuring newer and more disturbing ways for a series of hyper-violent sorta-zombies to sexually/violently ‘infect’ the uninfected and/or kill them. It’s a metaphor for a lot of stuff about humanity and human nature, and it has its fans, but it’s still pretty gross. But realistically the industry needs books we think are gross, that have consistent and imaginative creative teams, that fill consumer demand for books that aren’t JUST about superheroes. To paraphrase Fantagraphics’ Kim Thompson, The Industry needs more of every sort of book to make it function.

That said, we’re not really into people acting like these characters in real life: they’re the bad guys, and emulating their actions or behaviour doesn’t fly in our store, FYI.

There are 3 volumes collecting the previous Crossed mini-series currently in stock on the second floor, on both the “Garth Ennis” and “Zombie” shelves.