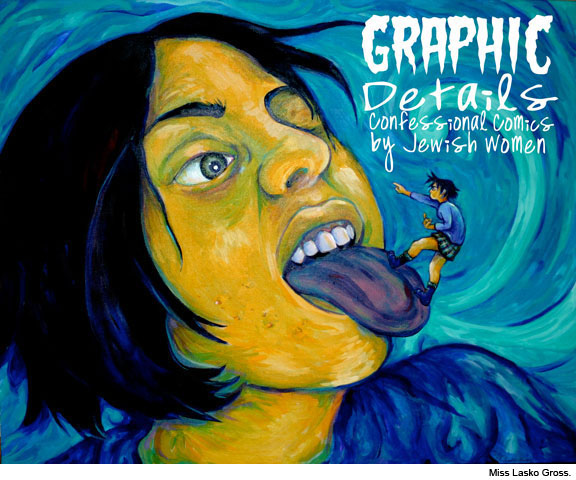 Graphic Details is a groundbreaking touring exhibition, providing the first in-depth look at a unique and prolific niche of graphic storytelling – Jewish women’s autobiographical comics. While the influential role of Jews in cartooning has long been acknowledged, the role of Jewish women in shaping the medium is largely unexplored. This exhibition of original drawings, full comic books and graphic novels, presents the powerful work of eighteen Canadian and international artists whose intimate, confessional work has influenced the world of comics over the last four decades, creating an entirely new genre.

Many of the original artworks on display have never been exhibited in public until now. Artists run the gamut from pioneering Wimmen’s Comix and Twisted Sisters artists of the 1970s and 1980s to the superstars of the new generation. The Koffler Gallery is the only Canadian venue for Graphic Details as part of a North American tour starting at the Cartoon Art Museum in San Francisco in October 2010, and continuing to the Yeshiva University Museum, New York in January 2012, and the Jean Paul Slusser Gallery of the University of Michigan’s School of Art & Design, Ann Arbor in September 2012.

For more on the more-than-a-dozen events surrounding the Graphic Details show, visit http://www.kofflerarts.org/Whats-On/Event-Detail/?recordid=154

This should be an excellent exhibit, and it’s phenomenal that it’s travelling to Canada. I’m quite proud that we’ve worked with many of the featured artists at The Beguiling and through TCAF previously, and I’m looking forward to this event. Make a point to check it out.