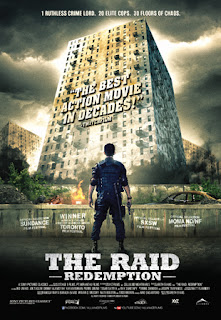 Alliance Films has been hitting us with crazy contest fodder lately, and we’re happy to pass these chances on to you. Want to see TIFF 2011 hit The Raid: Redemption before its wide release? Then enter to win!

You’re entering to win 1 of 10 passes good for two people to see THE RAID: REDEMPTION on Thursday March 22nd at 7pm. For a chance to win, send an e-mail with your name, daytime telephone number, and “ROYAL ACADEMY REDEMPTION” in the subject line to beguilingcontests@gmail.com before Tuesday March 20th, 11:39pm EST. 10 winners will be drawn and contacted on Wednesday March 21st. Their first name will be announced on the website.

RULES & REGULATIONS:
1. Subject line MUST contain entrant’s name, phone number, and “ROYAL ACADEMY REDEMPTION”, and must be sent to beguilingcontests@gmail.com.
2. Entries must be made from an e-mail address subscribed to The Beguiling’s mailing list. Signup on the front page of http://beguiling.com. (Seriously, we check and we disqualify people not subscribed to the mailing list.)
3. Entries must be received before Wednesday March 14th at 11:59pm.
4. Employees and family members of The Beguiling are not eligible to win.
5. One entry per household/phone number.
6. No purchase necessary, void where prohibited, no cash value, etc.

ABOUT “THE RAID: REDEMPTION”

Iko Uwais stars as RAMA a member of a special team (JAKA by Joe Taslim, BOWO by Tegar Satriya, ARI by Ananda George, WAHYU by Pierre Gruno and BUDI by Verdi Solaiman) arrives at a rundown apartment block with a mission to remove its owner, a notorious drug lord named TAMA played by Ray Sahetapy. The apartment block has never been raided before, never been touched by police. Seen as a no go zone, the building has become a sanctuary to killers, gangs, rapists and thieves seeking accommodation in the one place they know they cannot be touched. Making their move in the break of dawn, they work their way up the building under the cover of silence, steadily controlling the location one floor at a time. But when a chance encounter with a spotter blows their cover, TAMA orders a lock down on the building with all lights out and all exits blocked. Now stranded on the 6th floor with all communications cut and with TAMA sending out a call to arms, the special force team must fight their way  through every floor and every room not just to complete their mission, but to survive their bloody ordeal.