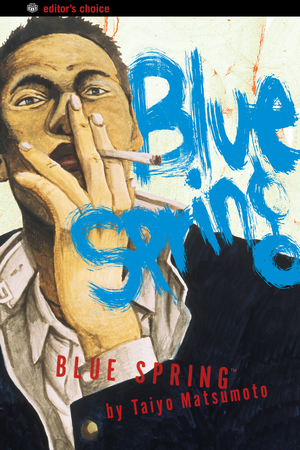 The Japanese title of Blue Spring is aoi haru (青い春), which can also be translated as “inexperienced adolescence” (a more wink-and-a-nod English title might have been Green Spring). These short stories about disillusioned teenagers are funny, violent, frightening, and sometimes blue. The longest stories, “If You’re Happy and You Know It, Clap Your Hands” and “The Revolver”, with their chaotically cramped panels, convey the impression of stretches of boredom punctuated by violence and intense excitement. In the first story, a gang of teenage boys at an extremely rundown school relieve their boredom by playing a game that involves seeing how many times they can clap their hands while leaning off the school roof. Try to clap too many times, and you won’t be able to grab the railing before you fall. “It’s not as scary if you imagine there’s a pool down there,” says one boy.

In “The Revolver”, written by Caribu Marley aka Garon Tsuchiya, a group of bored boys find themselves in possession of a gun, which makes them see the world in a different way.

My favourite stories are the last two. In “The Family Restaurant is our Paradise”, some boys having lunch at a family restaurant have a Tarantinoesque argument about the bill and start a fight. “This is Bad” recalls the ultra-violent insanity of Tekkon Kinkreet in a story where a crazed unstoppable madman chases a boy through Tokyo. The boy is just trying to get back to his girlfriend, who at the same time is being picked up by a rich weirdo. Speaking of Tekkon Kinkreet, the gangster Suzuki appears in one of the stories. The book is in the traditional manga format, but the art is anything but what one might think of as “traditional” manga. Unlike most mainstream manga, Matsumoto’s characters aren’t flawless. They look like they’re drawn messily, imperfectly, and sometimes hilariously exaggerated. These stories were drawn before Matsumoto began to be as influenced by European comics, and there is none of the fantastically detailed scenery and architecture of Tekkon Kinkreet or Number 5. But there are some wonderful action sequences, and more than a few times where the combination of gritty realism and cartoonish-looking characters gives the art an unsettling quality, a bit like the reader is Yuki in Gogo Monster, on the verge of hallucinating.

This is one of Matsumoto’s earliest works available in English and it’s a gritty, funny, and shockingly real portrayal of adolescence. Read it now before you get too old to remember what it feels like.