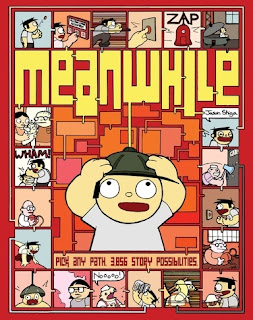 One of the cool things I did this year was head to GAMERCAMP, a fledgling festival in its third year devoted to indie video game development and developers. There’s a lot of conceptual overlap between independent video game creation and independent comic book creation, and I was asked to participate in a panel on the development of narrative in indie video games, and what gaming could learn from comics (and maybe what comics could learn from video games!).

One of the things I think that games do really well is create an immersive experience almost immediately–when we encounter games and gaming, we’re trained to think of the rules of the game as being distinct from the rules of our everyday lives. We immediately give ourselves over to the games, and their experience, as compared to comics where a writer/artist need to work pretty hard to truly immerse us in their world. One of the works I mentioned in my panel was Meanwhile, a graphic novel by Jason Shiga. It’s a choose-your-own-adventure graphic novel, a story with 3856 possibilities. It’s a graphic novel, no doubt, with an interesting and compelling narrative, but it asks you to approach the work as a game, with its own distinct rules. It’s an interesting hybrid, and a great book, and in mentioning it on panel a LOT of people seemed to want to check out that graphic novel…! 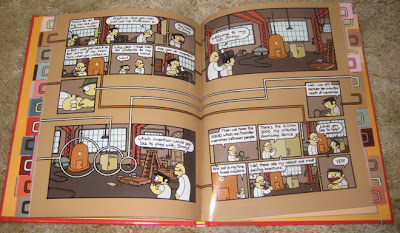 A look at the interior of the book, and its many branching pathways. Photo from http://www.wired.com/geekdad/2010/04/take-your-pick-with-meanwhile-by-jason-shiga/.

So of course we immediately sold out after Gamercamp. Err, sorry folks.

Which is a very long-winded way of saying that we got the book back in-stock recently! It’s now available on the main floor for just $19.95. And if you did happen to pick up Meanwhile in the last little while, I’d strongly recommend you pick up Jason’s other works in stock: Double Happiness, a truly disturbing little book that is not what you think it is; FLEEP, a math-and-problem-solving terrorist plot; BOOKHUNTER, the story of a library-services agent who doesn’t play by the rules! Seriously, Shiga is a serious talent, all of his work is totally worth owning. Don’t miss out!