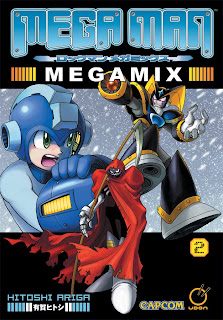 TORONTO—The Beguiling, Canada’s Premier Comic Book Retailer is proud to team with UDON Entertainment and The Japan Foundation to welcome Hitoshi Ariga, the hugely popular and respected manga creator of MEGA MAN MEGAMIX (the official manga of the phenomenally popular Mega Man video games) to Canada for the very first time! Mr. Ariga will make a very rare North American appearance at Mega Man! Megamix! Megavent!, a special event held in Mr. Ariga’s honour to celebrate the launch of his manga for English-language audiences at The Japan Foundation on Thursday, August 26th at 7pm. Please note, while this event is open to the public an RSVP is required.

With over 30 million Mega Man videogames sold worldwide, the character is easily one of the most popular and recognizable game characters in the world! MEGA MAN MEGAMIX, the new manga series written and drawn by Hitoshi Ariga and published by UDON Entertainment, is the official manga chronicling the stories of these games—and the stories behind the stories as well! The second volume of MEGA MAN MEGAMIX is scheduled to debut at the event, and volume 1 will also be available. In addition to the popular manga series, Hitoshi Ariga is an acclaimed character designer and graphic designer for video games and creator of many manga series.

“We’re truly honoured to welcome Ariga-San to Toronto,” said Christopher Butcher, event organizer and Manager of The Beguiling. “His work is very energetic and passionate, and it’s fantastic to see the games I remember investing so many hours into brought to comics! I think both fans of Mr. Ariga’s work on the MEGA MAN MEGAMIX manga, and fans of the Mega Man video games in general, are very fortunate to be able to meet him and will enjoy the event.”

The doors will open for the event at 7pm, with the event beginning at 7:30pm. Mr. Ariga will give a short presentation (In Japanese, with an English-language interpreter), and following the presentation he will take questions from his fans and the audience, and will sign autographs for all in attendance. Manga and Artbooks featuring Mr. Ariga’s work will be available for sale at the event courtesy of The Beguiling. Classic Mega Man video games and gaming equipment will be available to play and for sale courtesy of A&C Games in Toronto.

Because of the popularity of Mr. Ariga’s work, the organizers will be capping attendance at 100 participants. To attend, please RSVP at (416) 966-1600 ext. 103 or online at http://www.jftor.org/whatson/rsvp.php.

UDON Entertainment: UDON is an award-winning Canadian-based art collective formed in 2000 to provide high-quality creative services to the entertainment industry. Our client list reads like a “Who’s who” of the business, and includes Alliance/Atlantis, Capcom, DC Comics, Hasbro, Konami, Marvel Comics, Nintendo, Random House, ToyBiz, and Wizards of the Coast amongst others. In addition to client work, UDON is a diverse publisher producing comics, manga, and artbooks for all ages and audiences. http://udonentertainment.com/

The Japan Foundation: The Japan Foundation aspires to the role of catalyst for international exchange throughout the world, presenting valuable and appealing aspects of Japanese culture to other countries and promoting mutual understanding with peoples around the world. In addition to organising and supporting Japan-related events, a large portion of The Japan Foundation, Toronto activities involves the administration of its grant programs, grouped under three main areas: Arts and Cultural Exchange, Japanese-Language Education, and Japanese Studies and Intellectual Exchange. http://www.jftor.org/

The Beguiling: Founded in 1987, The Beguiling has set a new standard in Canada for comics and graphic novel retail. Showcasing the largest selection of alternative, underground and avant-garde graphic story telling in the country, The Beguiling has a worldwide reputation for excellence. Visit us online at http://beguiling.com.

A & C Games: We have the largest selection of rare and old school video games in Toronto! Buying, selling, and trading Video Games, Consoles, and Accessories for every generation of gamer! Visit us downtown at 706 Spadina Ave. (Just south of Bloor) or online at http://www.acgamesonline.com/.

All press/interview requests for Hitoshi Ariga should be made directly to Erik Ko, Publisher, UDON, at erikko@udonentertainment.com. Please note that Mr. Ariga communicates primarily in Japanese, though an interpreter may be available upon request.