Comics author Ariel Schrag will be in Toronto on March 27th, 2011 as part of the Graphic Details: Confessional Comics by Jewish Women exhibition at the Gladstone Hotel. The Beguiling will be on site to provide book-sales for the event. Here are the details: 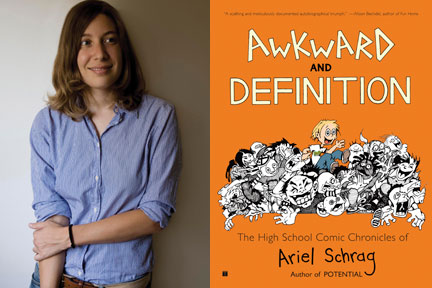 Presented in association with the exhibition Graphic Details: Confessional Comics by Jewish Women at the Gladstone Hotel, come early to see the exhibition!

Graphic Details artist Ariel Schrag presents a multi-media reading of her comics. Like a live animated movie, the performance includes projected slides from Schrag’s comics, a musical soundtrack, and Schrag reading all the voices. She will perform work about being Jewish, being queer, and being in high school.

Schrag is a New York-based author, artist and writer for the HBO series How To Make It In America. She also wrote for the hit Showtime series The L Word. For her High School Comic Chronicles (Awkward, Definition, Potential, and Likewise), Schrag wrote each of her four autobiographical graphic novels the summer after each year of high school. The books cover crushes, band obsessions, new friendships, coming out as bi, coming out as gay, falling in love, her parents’ divorce, and the personal and social complications of writing about life while living it. Potential is currently being developed into a feature film.

Ariel Schrag’s hour-long masterclass begins with a lecture on the elements of comics storytelling including outlines, rough drafts, style, inking, background imagery and comics’ symbolic vocabulary. The class then leads into a workshop with students collaborating on jam comics and brainstorming their own individual projects.