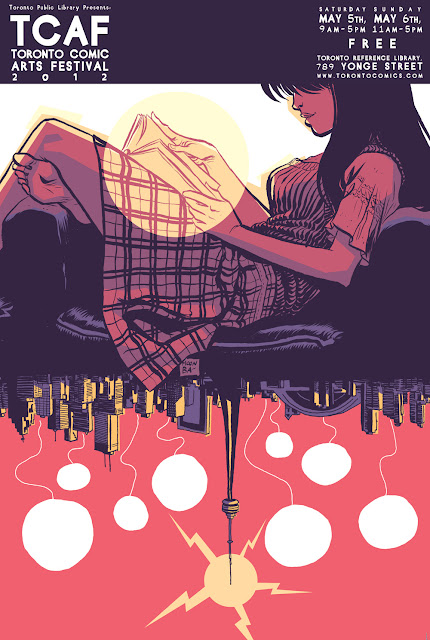 TORONTO— The Toronto Comic Arts Festival is back for another triumphant year on the first weekend in May,  returning to the Toronto Reference Library & The Appel Salon for its fourth consecutive year. Last year TCAF (as it is affectionately known) welcomed more than 15,000 patrons at its various venues and events around Toronto during the festival weekend, and 2012 is expected to be TCAF’s biggest and best edition yet. Over 300 international cartoonists are on the schedule, representing more than a dozen countries, confirming TCAF as the preeminent celebration of comics and graphic novels in Canada, and one of the most celebrated literary comics events in the world.

TCAF 2012 will include a who’s-who of comics and graphic novels, including headline guests Jeff Smith (Bone), Alison Bechdel (Fun Home), Guy Delisle (Pyongyang), and Gabriel Bá and Fábio Moon (Daytripper). In addition TCAF 2012 will see the debut of many new milestone graphic novels from our guests, including Bechdel’s Are You My Mother?, Delisle’s Jerusalem, and Derf’s My Friend Dahmer amongst countless others!

Jeff Smith returns to TCAF to celebrate a major milestone: the 20th Anniversary of his landmark creation Bone, the beloved Young Adult fantasy epic with more than 10 million copies in print. Smith is also near the conclusion of his newest work, RASL, a sci-fi noir series currently in development as a feature film by “Sherlock Holmes” producer Lionel Wigram.

Alison Bechdel brings her eagerly-anticipated new Are You My Mother? to her TCAF debut; the new graphic novel is the follow-up to her 2006 New York Times bestseller Fun Home. Bechdel is one of the premiere graphic memoirists of our time, with Fun Home named the Best Book of 2006 by Time Magazine—a first for a graphic novel. Bechdel’s follow-up will debut the week of TCAF, and her Toronto appearance will be one of her first book tour stops in support of the new work.

Guy Delisle is the noted French-Canadian graphic novelist whose political work has been praised by NPR, The Guardian, and The Chicago Sun Times for his insightful reportage and travel writing. His graphic novels Shen Zhen, Pyong Yang, and The Burma Chronicles have seen the cartoonist travel to international hotspots, places rarely glimpsed by the Western world, to explore life and politics there. Delisle will make his first appearance at TCAF in support of his new book Jerusalem: Chronicles From The Holy City.

These five cartoonists join a strong and diverse array of national and international cartoonists who make up the 2012 Festival, across a number of spotlights, including the following highlights:

– Oh Canada!: Canada makes a strong representation at TCAF 2012 with over 100 Canadian comics creators, including the much-celebrated Kate Beaton (Hark A Vagrant), the return of Scott Pilgrim creator Bryan Lee O’Malley, and acclaimed Quebecois cartoonist Michel Rabagliati, who will debut his new English-language graphic novel The Song of Roland.

– Cartoonists from 15 Countries: TCAF 2012 will see a stunning array of international cartoonists, including Arne Bellstorf (Germany, Baby’s In Black), Tom Gauld (U.K., Goliath), Gabriella Giandelli (Italy, Interiorae), Jason (Norway, Hey, Wait), Gary Panter (USA, JIMBO), Olivier Schrauwen (Belgium, The Man Who Grew His Beard), and Adam Warren (USA, Empowered). They will be joined by special envoys of cartoonists from Australia and England, as well as representative cartoonists from China, France, Japan, Malaysia, Mexico, Mozambique, New Zealand, and Spain! For Toronto’s literary community, TCAF 2012 is a once-in-a-lifetime opportunity to meet many of these creators!

And everything you love – and more! TCAF 2012 will reprise the most popular programming since its 2003 launch, including the popular “Webcomics Pavilion,” Dedicated OWLkids Kids Area, Wowee Zonk Small-Press Area, panel discussions and interviews, workshops, readings and art installations. Not only that, but all of these components will be expanded and increased, occupying four additional physical locations in the Yonge & Bloor neighbourhood around the Toronto Reference Library TCAF hub. We’re taking comics to the streets in 2012!

Over the next several months TCAF will announce additional featured guests from around the world, related events including film screenings, art installations, gallery showing and a full detailed schedule of the programming around our most popular guests. While we will be sending press updates for all key guest and event additions, be sure to visit the TCAF website regularly for up-to-the-moment updates: http://torontocomics.com.

The Toronto Comic Arts Festival would not be possible without the assistance of our sponsors and partners, including presenting sponsor Toronto Public Library and retail sponsor The Beguiling Books & Art.

TCAF would like to recognize the efforts of the following organization in planning TCAF 2012: OWLkids, NOW Magazine, The Italian Cultural Institute, NORLA (Norwegian Literature Abroad), The Flemish Literature Fund, The Japan Foundation and The French Consulate in Toronto.

Sponsorship opportunities for TCAF 2012 are still available, please contact us at: contact@torontocomics.com for more info.

All general press inquiries, interview and press accreditation requests should be submitted to: media@torontocomics.com.