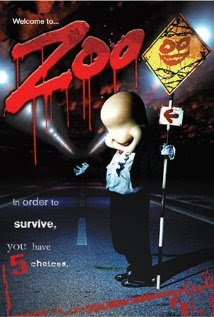 Internationally acclaimed manga creator Usamaru Furuya will be in Toronto as a Guest of Honour of the 2011 Toronto Comic Arts Festival, May 7th and 8th. But in addition to his comics work, Furuya is also a fine artist, writer, and designer, and has contributed to several popular Japanese films. One of these is ZOO, an unique collection of 5 thematically linked short films, all based upon the writing of popular Japanese horror writer “Otsuichi.” Furuya was tapped to write the screenplay adaptation, provide character designs, and storyboard one of the short films, an anime based on the poem “Sunny.”

To celebrate this facet of Furuya’s work, TCAF and the Shinsedai Film Festival will be co-presenting a screening of ZOO on Monday, May 9th at 7PM at The Toronto Underground Cinema. Usamaru Furuya will be on hand to introduce the film and, following the screening, will engage in a moderated Q&A with J-Film Pow-Wow Blog Editor and Shinsedai Film Festival coordinator Chris MaGee. A short book sale and signing will follow. RSVP on Facebook.