Hey folks! The Beguiling is sponsoring this play by one of our customers, which will be running from August 22nd to August 26th. We’ll be giving away tickets on the mailing list next week too, so be sure to be signed up! For now though, here’s everything you need to know…! 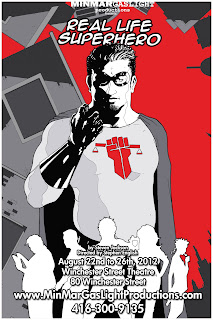 “So how does a man go from everyday normality and decide to put on a costume and play superhero? How does a man make the decision that he can change the world?”

A writer grapples with the question of what makes a hero, after the death of an ordinary man who decided to put on a superhero costume and take to the streets in Real Life Superhero, a new gripping drama by Steven Jackson.

Directed by Stephen English, Real Life Superhero follows the life of Scott Cooke, a simple man who escapes from his daily life into the night to emerge as Justice, a superhero who lives by his name.  As the writer delves into the life of Scott through the people in his life, questions are raised; who was Scott Cooke and why did he put on a costume?  Was he crazy or a crime fighter?  Was he in fact a real life superhero?

Part comic book, part existential journey, Real Life Superhero dynamically captures the all too real phenomena when people choose to bridge the gap of fantasy and reality and become the hero that society desperately needs.  Deep in Cabbagetown at the Winchester Street Theatre, a city is illuminated, a dark alley appears and a crime brings forth a superhero.  An audience will be transported, frame by frame, into this world, but will they be the same when they leave?