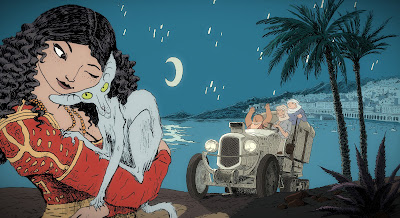 Le Chat du Rabbin (The Rabbi’s Cat), the beloved graphic novel of French comic artist Joann Sfar, has sold over 900,000 copies, and now makes it to the big screen in this whimsical and visually-stunning animated film. In pre-war Algiers, Rabbi Sfar lives a quiet life by the sea with his beautiful daughter Zlabya and her talking cat. Along with a Russian painter and a wise old Arab Sheikh, Sfar and the mischievous pet set out on a quest into the unknown depths of Africa. Using hand-drawn animation, Sfar and co-director Delesvaux recreate the multicultural community of 1920s Algiers in vivid and loving detail. This much-anticipated film adaptation makes its Toronto Premiere at this special screening, co-presented with The Beguiling and The Toronto Comic Arts Festival. TORONTO PREMIERE. France / Austria 2011, 100 min. French with English subtitles. Not suitable for young children.