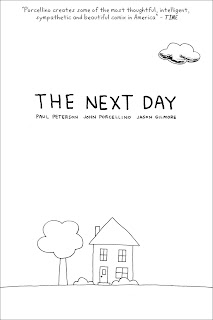 THE NEXT DAY
Book Launch & Exhibition
Tuesday, May 3, 2011
The National Film Board of Canada Mediatheque
150 John St. (at Richmond St. W), Toronto
Doors open at 7:00; Event starts at 7:30
Admission is FREE

This Is Not A Reading Series hosts a free intimate discussion with the entire creative team behind The Next Day, including indie-comics star John Porcellino (“Porcellino creates some of the most thoughtful, intelligent and beautiful comix in America” – TIME). The hour long discussion will be followed by a reception, and will also mark the opening of an ongoing immersive exhibition of original artwork from the graphic novella as well as animations, soundscapes, projections and more from the upcoming interactive experience at the NFB Mediatheque in Toronto through late May.

The Next Day is a groundbreaking graphic novella constructed from intimate interviews with survivors of near-fatal suicide attempts. In this poetic and profound philosophical exploration, four seemingly ordinary people each offer haunting personal insight into life, the decision to end it, and what comes after… It is produced and published by Pop Sandbox, the award-winning company behind KENK: A Graphic Portrait.

The Next Day was developed simultaneously as a separate interactive animated documentary online, in co-production with the National Film Board of Canada and in association with TVO as part of the NFB-TVO Calling Card Program.

The Next Day graphic novella will be available in Canadian bookstores and comic shops across North America in early May. It is distributed by Raincoast Books. The interactive experience will launch in late May at nfb.ca/thenextday and tvo.org/thenextday.

The entire creative team will also be guests of the Toronto Comics Art Festival May 7th and 8th, and appearing at the Drawn & Quarterly store in Montreal May 10th. Further details will be announced shortly and more information is available at thenextday.ca.

Co-Presented by: The National Film Board, TVO, This Is Not A Reading Series, Hot Docs Documentary Festival, The Toronto Comic Arts Festival, The Canadian Mental Health Association, Raincoast Books and The Toronto Animated Image Society