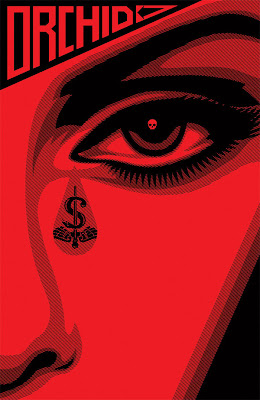 
Tom Morello (Rage Against The Machine, Audioslave, Nightwatchmen) has entered the wild world of comics with his new series ORCHID, and it is being illustrated by none other than Toronto’s own Scott Hepburn! Please join us in celebrating the third momentous issue of the series’ release!

Scott did sign copies of issues #1 & #2 in store, but on release day for #3 from 5pm-7pm, we’re going to do an official signing! Get your books personalized, maybe even a sketch, and pay a compliment to Mr. Hepburn for his lovely work.

Scott was also the artist on several Star Wars comics, Marvel’s Sentinel, and many other UDON projects.

About Orchid:
When the seas rose, genetic codes were smashed. Human settlements are ringed by a dense wilderness from which ferocious new animal species prey on the helpless. The high ground belongs to the rich and powerful that overlook swampland shantytowns from their fortress-like cities. Iron-fisted rule ensures order and allows the wealthy to harvest the poor as slaves. Welcome to the world of Orchid.