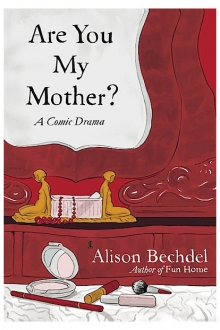 Alison Bechdel Presentation and Signing!
Author of Fun Home and Are You My Mother?
Sunday, December 2nd, 2012, 5:30pm-7:30pm
@ The Centre for Social Innovation, Annex Building
720 Bathurst Street (Just south of The Beguiling)
FREE

Exciting News: Alison Bechdel is coming back to Toronto! Not seen since debuting her fantastic memoir Are You My Mother? (the follow-up to the critically acclaimed/best-seller Fun Home) at TCAF this spring! Alison Bechdel is coming back to our fair city to be part of the inaugural Elisabeth Young-Bruehl Memorial Syposium on Childism. Luckily, she also has time in her schedule to swing by our shop for a quick presentation and signing!

On December 2nd, at 5:30pm, Alison Bechdel will be giving a presentation on her work, as well as hanging out for a bit after to sign some books and meet with fans. Seating will be limited. Bechdel’s TCAF event was delivered to a packed and delighted house, so next weekend is an evening to surely not be missed!

Originally announced as “At The Beguiling”, this event will be taking place one block south of The Beguiling, at 720 Bathurst Street. It is at The Centre for Social Innovation, in the ING Direct Presentation Space. This will give us much more room to welcome Toronto’s Bechdel fans!

About the Author: Alison Bechdel began keeping a journal at the age of ten, and has been assiduously archiving her own life and times with words and pictures ever since. For twenty-five years she wrote and drew the comic strip Dykes to Watch Out For, a generational chronicle considered “one of the preeminent oeuvres in the comics genre, period.” (Ms.)