Plus: DC: THE NEW 52 for ONE LOW PRICE DEAL REMINDER

This September DC Comics will be relaunching their entire universe from the ground up, with 52 brand new first issues being released over the course of the month. But the fun starts the week before, on August 31st, with the release of the very last comic in the ‘old’ DC Universe, Flashpoint #5, and the very first comic of the new DCU, Justice League of America #1.

The Beguiling will be doing a special 12:01am release of these historic two comic books on Wednesday August 31st, the moment we are allowed to sell them! But why not come by a little early (say… 11ish?) and take part in our DC Comics sale! We’ll be offering 30% off of the regular price (generally U.S. Cover Price) of all in-print DCU comic books, graphic novels, and trade paperbacks. We’ll also be offering spot sales on various other books (and you gotta show up in person to see what those are!). It’ll be a fun little DC Comics party for those that would like to attend, and please let us know if that’s you!

The Fine Print:
– We are only allowed to sell Flashpoint #5 and Justice League of America #1 at midnight. . Every other ‘new’ comic, you gotta wait until 11am on Wednesday when the store opens.
– The sale will ONLY last from 11pm until 1am, so don’t miss out!
– Items put on hold prior to the sale will NOT be available for sale pricing.
– It’s also the last day to sign up for our DC 52 FOR ONE LOW PRICE deal! Read on for details… 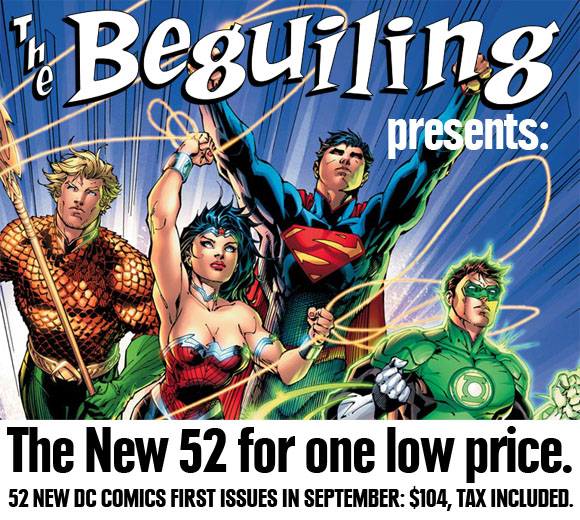 In September 2011, DC Comics will relaunch all of their ongoing superhero series with new issue #1s, all at once! Action Comics #1, Detective Comics #1, Justice League #1 and more will grace store shelves this fall, and it seems like everyone’s got an opinion about it. Are you anxious? Excited? Are you upset or enthusiastic or hopeful? But most importantly… are you curious?

52 brand new issue #1s is a pretty unprecedented move in the comics industry, and if you’ve ever wanted to witness the rebirth of a superhero universe from the ground up, have we got a deal for you. We’re offering a special deal to all of our customers—regular, new, pull file—to pick up all 52 new issues for one very low price: $104 (that’s $92.04 + 13% HST). You must pre-pay $104, and do so before August 31st, 2011.

The regular price of these books would come to $180.21 (including tax), making this deal a better-than-40% savings.