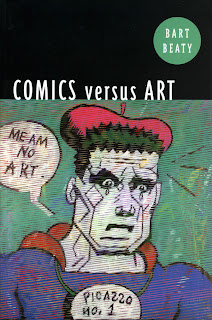 Presented by The Beguiling Books & Art

You’re cordially invited to attend the official book launch of Comics Versus Art, the brand new book of comics criticism by Dr. Bart Beaty. Bart has been a long time friend of The Beguiling and is a regular contributor on the subject of French comics to ComicsReporter.com.

“Comics Versus Art” examines the relationship between comics and the art establishment, from museums and auction houses to galleries and the press. It’s an interesting book that challenges the notions of the general public’s opinion of comics and of art, as well as the closely held beliefs of the comics cognoscenti.

Beaty will be presenting from the work, and it will be a good time digging into a subject of which we can only assume that you are incredibly interested, because who isn’t interested in comics? And ART?!