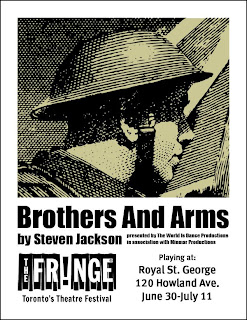 A comic book artist wonders if he is showing truth. A soldier deals with the pain of return. A woman must find her place in between them. Two brothers. One woman. A war at home.

The Beguiling is a proud sponsor of BROTHERS AND ARMS, a brand new Fringe Festival play by Steven Jackson. Can I just say that it’s so nice to see a comic-related play or event that isn’t all about superheroes? Well I am. Anyhow, Steven is a customer of ours and he’s put together an interesting Fringe play that’s already got a lot of buzz–it’s about two brothers during WWII, one on the front lines and one illustrating comic books about the same subject, and the gulf between their respective realities. We’re looking forward to it! Hopefully you will too.

See you there!
– Chris @ The Beguiling