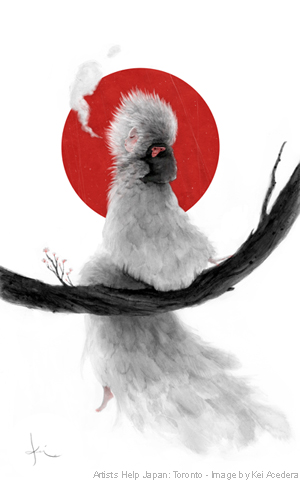 TORONTO—Toronto’s Illustration and Artistic Community comes together on April 17th in a 12 hour art-event at Revival. The unique event will raise money to aid relief efforts in Japan following the devastating recent earthquake and tsunami there. Spearheaded by a consortium of Toronto illustration studios, the Artists Help Japan: Toronto event is the local iteration of a charity movement begun by Pixar. The Toronto edition will feature live art shows, a silent auction, and dozens of artists and illustrators selling commissioned drawings, with all proceeds benefiting the Canadian Red Cross.

Artists Help Japan: Toronto will feature more than 24 artists and illustrators from the Greater Toronto Area creating original drawings for 12 hours! This is an unprecedented opportunity for the general public to commission an original drawing from a professional artist and watch its creation in process; and the artist’s fee will be donated entirely to the Canadian Red Cross.

Artists Help Japan is a charity movement initiated by Dice Tsutsumi, an art director at Pixar Animation Studios, who was also behind 2008 Totoro Forest Project to help preserve Sayama Forest in Japan and Sketchtravel Project, to gather the force of communities of artists and creative minds around the world. We believe artists have special roles to contribute to the society. http://artistshelpjapan.blogspot.com/

Revival Bar has been entertaining guests, visitors and fans as a premium event space since 2002. Revival has generously donated the use of their main space for the Artists Help Japan: Toronto event, and will be donating $1 from the cost of every drink to the fundraising efforts. http://www.revivalbar.com/